I will start Michelangelo Antonioni’s filmography in the site with his final film. “Eros” is a compilation of three films made by different directors, exploring love and romance, as the title suggests.

While European cinema has produced extraordinary film makers over the years (and still do), Michelangelo Antonioni will forever occupy its highest pantheon of greats. Since he is also my favourite Italian director, I feel duty-bound to writing a few lines about his genius.

Antonioni’s films intensely engage the audience mind – there are very few films of his that you could get away with a casual eye. His trademark scenes are long takes with the camera following the character a few feet away, to give the audience a disconnected but detailed view of his subject. Even today, you see several young directors, particularly from Latin America inspired by this style of film making. His films mainly delve into the void in human relationships – his characters do things to conform, be accepted, and succeed outwardly, but are nevertheless melancholic and empty within.

In “Eros” – his segment titled, “Il Filo Pericoloso delle Cose” [Eng. Title: The Dangerous Thread of Things] has been slated by some critics; they cite the obvious sensual scenes and allude them to the later-life sexual fantasies of an old man – he was in his 90’s when the film was made. But I find this criticism unjustified and have to put this in perspective.

All three segments in the film deal with different stages of a couple’s relationship. While the first segment concerns unrequited love between a prostitute and her tailor (holding hope for a future), and the second with a man’s stress at work threatening to derail a happy marriage (the present), the last – Antonioni’s segment, is about a couple’s relationship that has gone stale, but where both are weary of being the one having to call it a day (a relationship with a past). They’re on holiday at a southern coastal village, in the hope of finding a way to live together.

For a start, this is certainly the most difficult of all segments where you need to explore the film’s theme when romance is non-existent, and love, strained. This resonates with his earlier 1961 classic, “La Notte” [The Night], where a couple’s relationship had similarly reached an impasse, but where it differs is in the conclusion. While it is all doom and gloom in the former, ‘The Dangerous Thread’ bring them back together through a catalyst, in the form of a free-spirited woman living next door. Antonioni manages to deliver the film’s theme while leaving us to wonder whether this ‘arrangement’ is ever going to last or will there be an imminent tipping point. I think his critics need to revisit this film with a more open mind. Needless to say, the film is Highly Recommended Viewing..!

The scenes for this post were made from the ‘Mei Ah’ DVD – uncut, and with the original and mainly English soundtrack. I’d recommend this over the Warner and Artificial Eye editions, both dubbed into Italian during post-production, with some scenes needlessly butchered.

The Nudity: Luisa Ranieri and Regina Nemni
(Added Oct 2018): While it is unusual for me to open and edit old posts, we can make an exception here. Antonioni’s gem of a segment will ‘grow’ on you over the years even if you’ve casually watched it only once. This is partly because you tend to remember threads from his other, more celebrated films and discover a connection. Apart from ‘The Night’ which I’d already mentioned above, there are elements from Antonioni’s famed trilogy – L’avventura, L’Eclisse, and Il deserto rosso, that will find resonance in this final work of his. The segment is much more than a vision of Eros; Antonioni uses contemporary cinematic language to expand on what he’d said earlier. I urge viewers to get familiar with his filmography to appreciate this segment better. And finally, about the nudity. While I’ve seen and commented on many nude scenes from cinema, it is scenes from this film that haunt me more than any other. Exquisitely pictured and aesthetically edited to the last frame, the seminal scene is a joyful celebration of the female nude in full motion – they are not posed props made for the male gaze, but living, breathing women celebrating their nakedness and feeling liberated while doing so. Perhaps that’s why a still from this segment continues to adorn the site’s masthead for all these years. 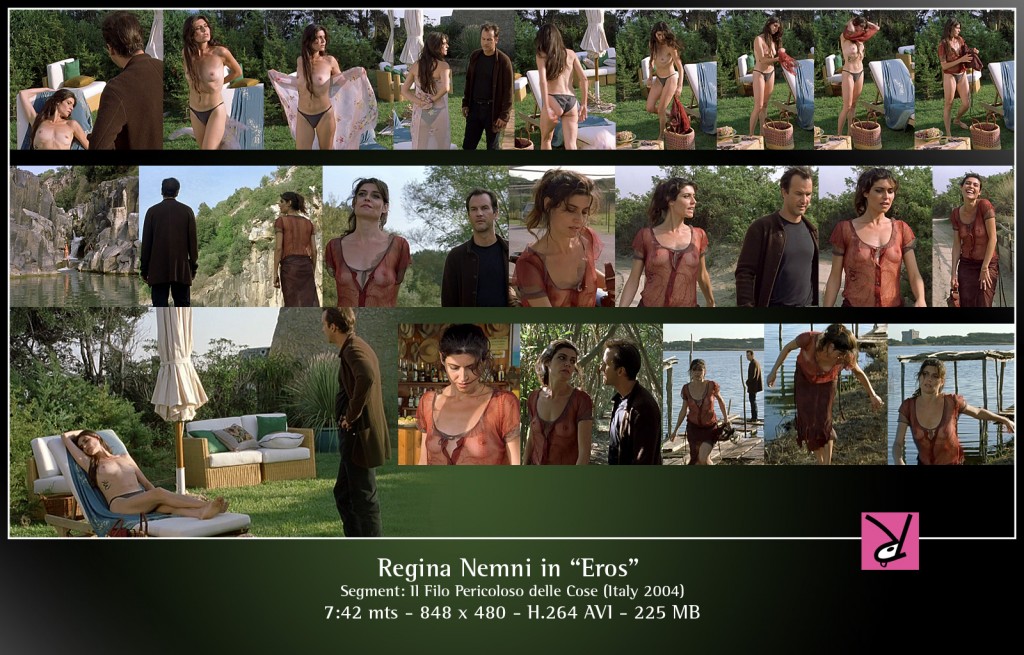 Regina Nemni plays the wife whose relationship is in crisis, in “Il Filo Pericoloso delle Cose”. 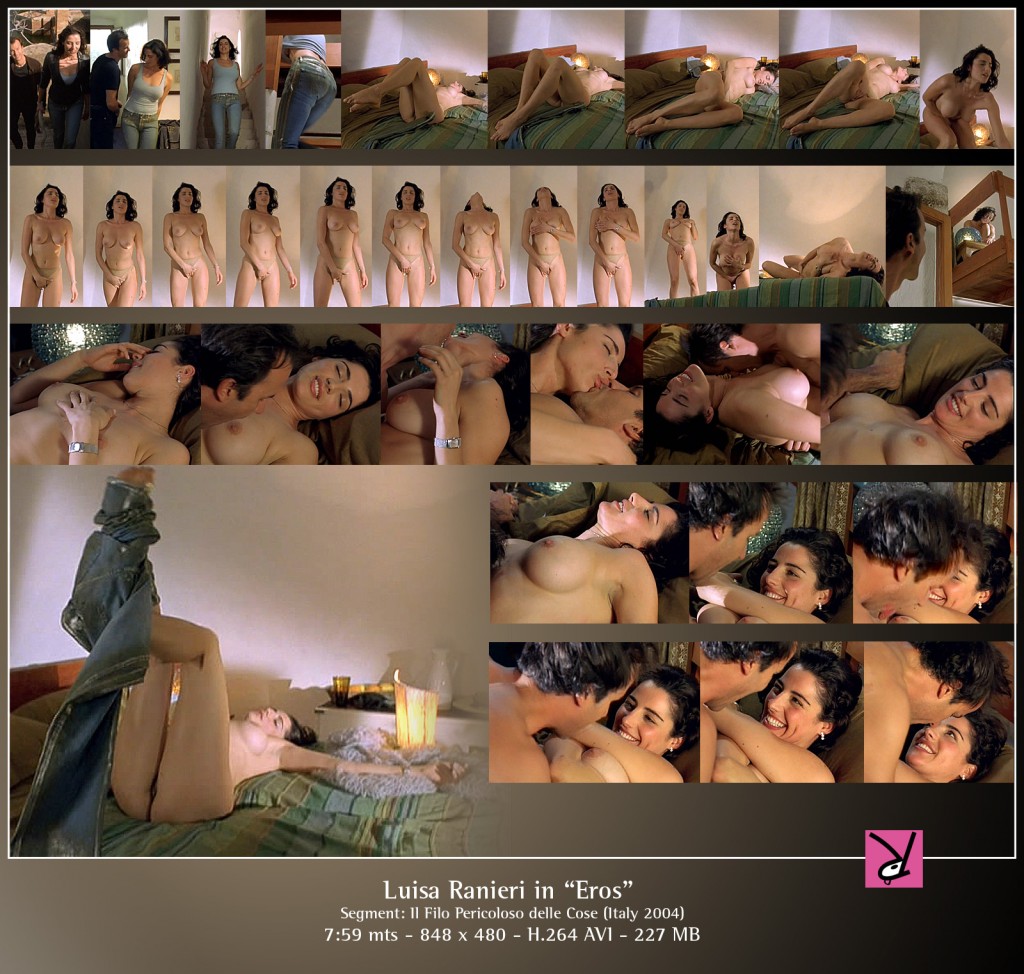 Beautiful Luisa Ranieri is all sensuality in this exquisite scene from “Eros”. 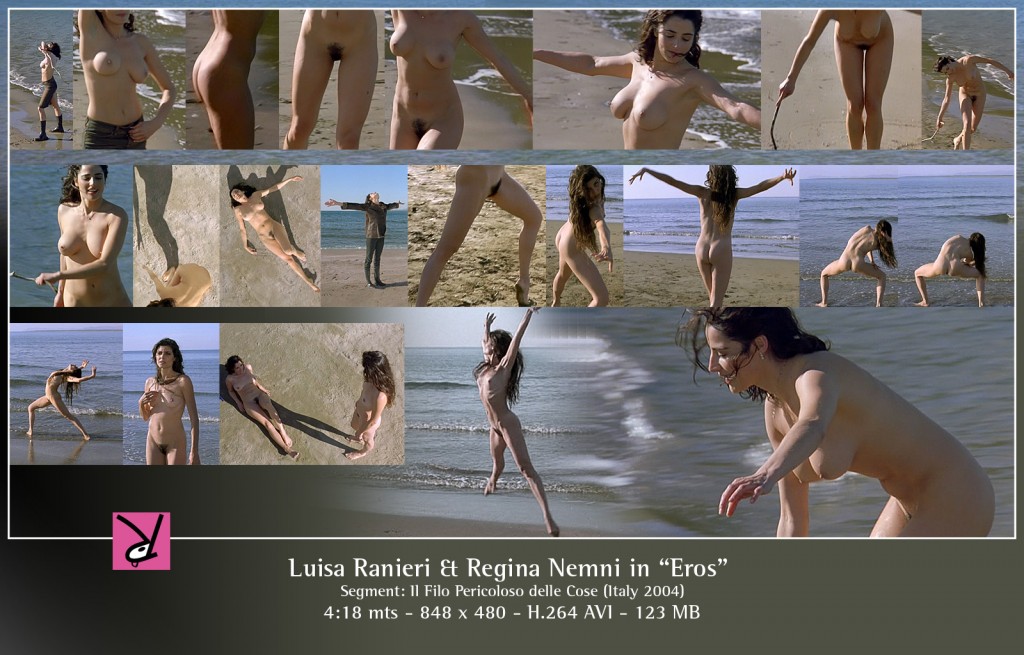 Luisa Ranieri and Regina Nemni wouldn’t have done these scenes if it wasn’t Michelangelo Antonioni directing them in “Eros”.