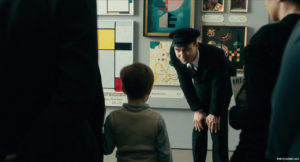 Though this is not the central theme, Florian Henckel von Donnersmarck, in his Oscar-nominated semi-biographical epic “Werk ohne Autor” [Eng. Title: Never Look Away], poses a rarely discussed question; Are artists – as liberators, revolutionaries, and thinkers, letting themselves down by endorsing one or the other political party? The argument, as expounded by the art movement in the Düsseldorf Art Academy of the 60’s, assumed that artists cease being revolutionaries the moment they try to answer the questions that their own art raises. These days, many dismiss the thought as elitist and often root for a particular party that they consider the lesser of the evils, while some go all the way to establish their own political party. It’s an interesting thought nevertheless, one that will shape the art and work of the film’s protagonist Kurt Barnert (Tom Schilling), whose character was inspired by the life of one of modern Germany’s celebrated painters, Gerhard Richter. 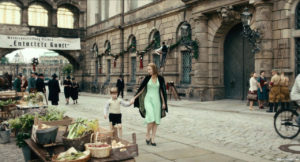 Young Kurt lives with his parents and his mother’s extended family in a middle class household near Dresden. He has a close relationship with his beautiful teenage aunt Elisabeth (Saskia Rosendahl), who would sometimes take him to modern art galleries, or stop by the bus station to listen to buses blaring their horns in unison when requested; little Kurt and Elisabeth were close friends who shared their thoughts and secrets. 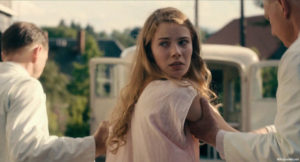 Unfortunately for Kurt, he’s also growing up in 1930’s Germany after the Nazi’s took power, and whose presence and ideology were fast infecting all aspects of life. Their Eugenics-supporting family doctor and Nazi member forcibly removes Elisabeth from the family home after falsely attributing her eccentricity and creativity to schizophrenia. 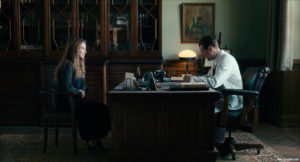 Elisabeth languishes in a mental institution bereft of any legal recourse, and thanks to another evil Nazi Medical Officer, Professor Carl Seeband (Sebastian Koch), is sent to the gas chambers during the last days of World War II. Kurt’s father is forced to join the Nazi party in order to keep his teaching job, a move that’ll hinder his prospects for the rest of his life. 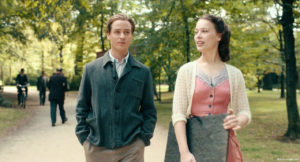 Kurt’s life changes after ending up in the Communist Eastern side following Germany’s postwar partition. As an art student, he finds the Communist approach to art not too dissimilar to that of the Nazis. He however falls in love with Ellie (Paula Beer), a fashion design student at the academy, who bore a striking resemblance to his beloved late aunt Elisabeth. Ellie’s father, none other than Professor Carl Seeband himself, had cleverly managed to evade the War Crimes Tribunal and also found for himself an important position within the Communist establishment. But Kurt is unaware of Seeband’s role in Aunt Elisabeth’s tragic fate, and neither it seems, is Seeband aware of Kurt’s relationship to Elisabeth. 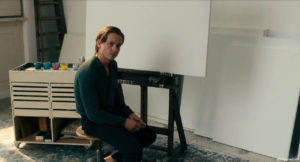 Kurt and Ellie get married and defect to West Germany just before the Berlin wall goes up. Determined to pursue art in Düsseldorf, Germany’s most avant-garde academy, Kurt finds himself creatively challenged by professors and peers alike. The fertile environment, not least his father-in-law’s overbearing put-downs, enable him to evolve his own style and eventually discover himself… 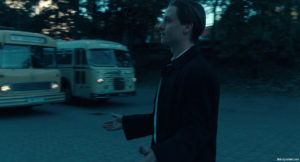 After exploding onto the world of cinema with a BAFTA and Academy Award in his magnificent debut feature ‘The Lives of Others’, Florian Henckel von Donnersmarck returns to form with a beautifully scripted and ‘complete’ film. At over three hours, it is epic in its scope, but it has its audience engaged all the way through, to the extent that one might even be inclined to endure another hour of this saga without losing interest. Adapting freely from Gerhard Richter’s life story, von Donnersmarck nevertheless stays true to essential facts and details (including the staircase portrait), and gives it a life of its own. The cinematography, production design, casting, and script is award-worthy, with notable performances from the main cast. The only jarring note I felt was the Hollywood-style music score which was unnecessary for a film of such substance (perhaps it has something to do with the Walt Disney connection). And for a pleasant change, one finds the English title for the film being much more apt than the original German title. Needless to say, this gem is Highly Recommended Viewing..!

The Nudity: Saskia Rosendahl, Paula Beer, Tom Schilling, Eva Maria Jost, and others
The film features some of the most delightful nude scenes seen in cinema after a long time. A sweeping statement this might be, but here’s my explanation; the scenes are liberating rather than exploitative, and they’re unapologetic about depicting it in a matter-of-fact manner. They give an artist’s point of view, and more importantly, they don’t pander to trendy nonsense such as the so-called concern regarding the ‘male gaze’ – this is after all a film about an artist who actually painted nudes as part of his art, and as the title suggests, never shied away from looking. Coincidentally, some of the scenes do remind you of Eliseo Subiela’s similarly titled ‘Don’t Look Down’. There are at least eight noteworthy scenes in the film, of which four feature frontal nudity.

Saskia Rosendahl, Paula Beer, Tom Schilling and others from the German epic, “Werk ohne Autor” aka “Never Look Away”, 2018.