Werner Schroeter’s films are pretty much like the man himself, less talked about but theatrical and larger than life in person. Among his last films acknowledged as part of the Neuer Deutscher Film canon, “Tag der Idioten” [Eng. Title: Day of the Idiots] is an exploration of people’s fear of accepting their own eccentricities, idiosyncrasies and imperfections in a conformist world. 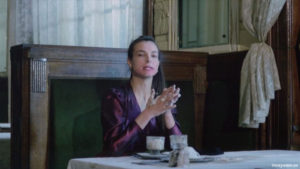 Carole (Carole Bouquet) snaps one day, unsure anymore of everything she had cared about thus far; her boyfriend, job, and standing in society. Frustrated with the real world, she leaves home, and after flushing the contents from her handbag down the toilet, orders three Viennese coffees for herself at a posh cafe, only to smear them all over her face and the table. “I need to breathe…”, an angst-ridden Carole mutters. 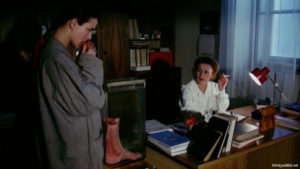 She gets herself declared clinically insane after accusing a neighbour of being a terrorist and leading police on a wild goose chase. In order to avoid prison, she voluntarily checks into Dr. Laura’s (Ingrid Caven) Victorian-era asylum; the doctor is aware that Carole isn’t insane in a conventional sense, but nevertheless accepts her as a patient. She’d been experimenting on patients ‘healing themselves’ through anti-psychiatry and hopes it might help Carole too.

Carole finds the patients in the asylum simultaneously fascinating and repulsive, and notices among them the very woman she’d reported as being a terrorist. She ‘escapes’ the asylum more than once, but turns herself in each time, for she’s no longer sure if the world outside is any more saner than the asylum. Carole isn’t happy with either worlds and begins to find the very idea of living meaningless… 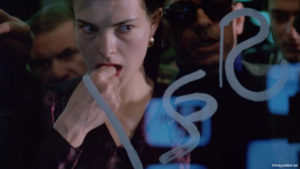 The impressionistic melodrama however abandons any attempt at making a point and gets consumed by its own madness, by becoming a voyeur to the excess on screen. The film isn’t nearly as depraved as some of the exploitation films of the era, but will regardless shock viewers unaccustomed to seeing scenes of urophilia (golden showers) in mainstream cinema. 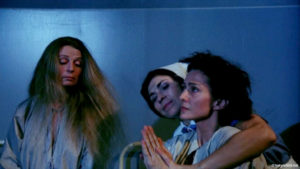 The relative obscurity of the film, despite the director’s auteur-credentials and featuring a then current ‘Bond girl’ in a starring role, has prevented one of Carole Bouquet’s most memorable performances from being seen by a wider audience. The film also features an ensemble cast that include Schroeter’s long term muse and collaborator Magdalena Montezuma, the beautiful Christine Kaufmann, and Ida Di Benedetto. This might not be one of Shcroeter’s masterpieces, but his signature style and feminist message is written all over the film, and for that at least, it is Recommended Viewing..!

The Nudity: Carole Bouquet, Mostefa Djadjam, Dana Medrická, Magdalena Montezuma, Ida Di Benedetto, and others
The film begins with a long scene of a stunning Carole Bouquet pacing up and down the room completely in the nude as her oblivious boyfriend (Mostefa Djadjam) sleeps. She appears nude in two other scenes later in the film. Czech actress Dana Medrická appears topless on a few occasions as a patient with an urge to flash in front of others. Magdalena Montezuma walks nude into a party, asking to be placed in prison for an imagined crime. Ida Di Benedetto, who plays a deeply religious nurse, is briefly seen topless while punishing herself. There is further nudity in a bathroom scene where for probably the first time in mainstream cinema, an actor is shown actually urinating on another (unlike ‘Salo, or 120 Days of Sodom’ where everything was simulated). The scene is nonsexual, but the shock value is in the banal manner of its presentation.

Carole Bouquet, Magdalena Montezuma and others from Werner Schroeter’s drama,
“Tag der Idioten” aka “Day of the Idiots”, 1981, West Germany.