One could safely assume that among all of Julio Medem’s film, his beguilingly cryptic and sensual 2001 drama, “Lucía y el Sexo” [Eng. Title: Sex and Lucia] would probably be the most widely viewed among non-Spanish audiences. While some may have been drawn to its liberal sex scenes, many, at least from my neck of the woods, would relate the film to Spain’s stereotypical image of sun, sand and sea, and paella. Medem however, had gone the extra mile in ensuring these images are not merely used as props but essential elements to tell his poetic story, rich in symbolism.

Even though this isn’t my favourite Medem, it is nevertheless beautiful (and also, very feminine) cinema until his later Room in Rome. Here you have the symbolic mother, the lover, and the whore, intertwined, each playing an important part in connecting the story. And then you have ‘the island’, in itself is a metaphor, where everything starts and ends (and starts again). The kaleidoscopic qualities of the film will encourage you to discover something new every time you watch it, whether it was intended by the director or not. For this reason, the film occupies prime position in my library – within easy reach, so that it could be used on a whim. If you haven’t seen this film before, it is about time you did. Needless to say, it is Highly Recommended Viewing.

Here’s the gist: Lorenzo, a writer, meets Elena at an island while on holiday and they have sex – by the sea at night, on his birthday. He never hoped to meet her again, but fate had other ideas – he had after all just planted the seed for the rest of the story to unfold. He meets Lucía, a woman working in a restaurant opposite – she had already fallen in love with him and his work, and he loves her in return. Life now seems so tranquil that he now has nothing much to write about. But thanks to his friend, he’ll learn that he has a daughter (through Elena), and will attempt to bond and build a relationship with her without Elena’s knowledge or approval. A frisky child-minder named Belén will enter his life, and from then events spiral downward, until the main characters converge on ‘the island’.

Paz Vega: Compilation 1
For many, the film will be remembered for the lovely Paz Vega. She plays Lucía, the girl madly in love with Lorenzo.

Najwa Nimri:
The beautiful Najwa Nimri steals our heart as Elena – a character who’s probably the kindest woman in the planet. The first part of the scene is of her with Lorenzo, followed by her discovery that she’s pregnant, at which point she breaks up with her partner, through his secretary over the phone. The first scene is probably one of the most romantic underwater love scenes ever filmed. The second half has no nudity, but sexy nevertheless. The compilation as a whole showcases Julio Medem’s artistry. 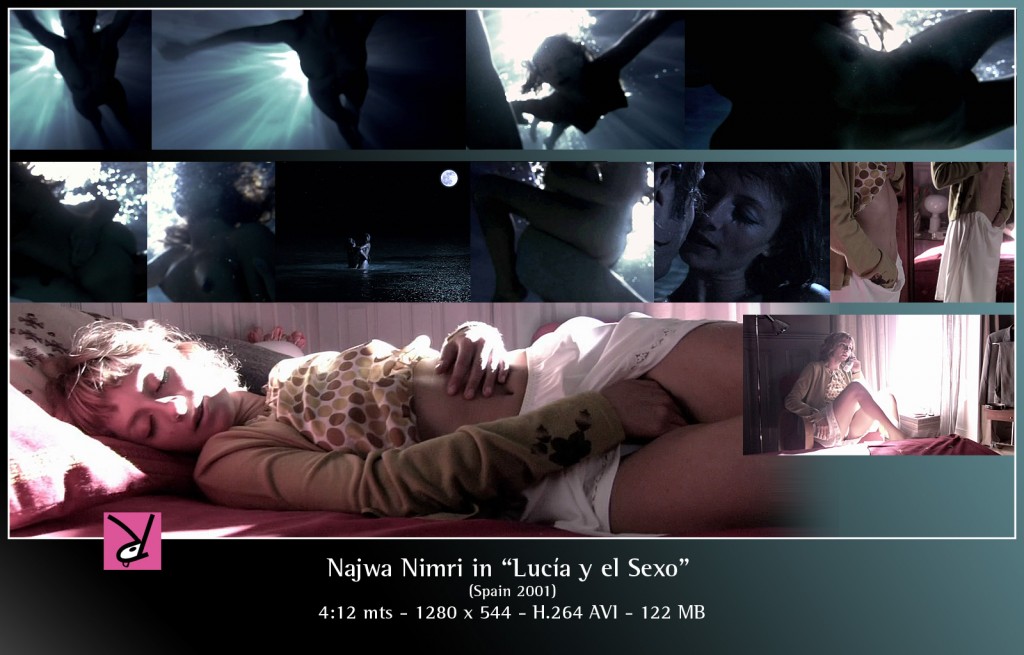 Paz Vega: Compilation 2
Some more scenes of the lovely Paz Vega playing Lucía. The scenes are more or less continuos – depicting Lorenzo and Lucía’s developing relationship. The first half is very ‘visual’ that require little description. The second half of the compilation (unfortunately forgot to include caps for these in the graphic) is of Lucía visiting the island on her own after she presumes Lorenzo is dead after an accident. She stay’s at Elena’s place, where she’s introduced to Carlos (Antonio had taken on another identity), also a tenant there. Elena tells Lucía that Carlos and she have a purely sexual relationship, and the fact that he had the biggest penis she’s ever seen, which was enough to make Lucía curious about Carlos. It includes some nude scenes by the beach, and Lucía receiving a sensual mud massage from Carlos. She however stops him from going all the way. 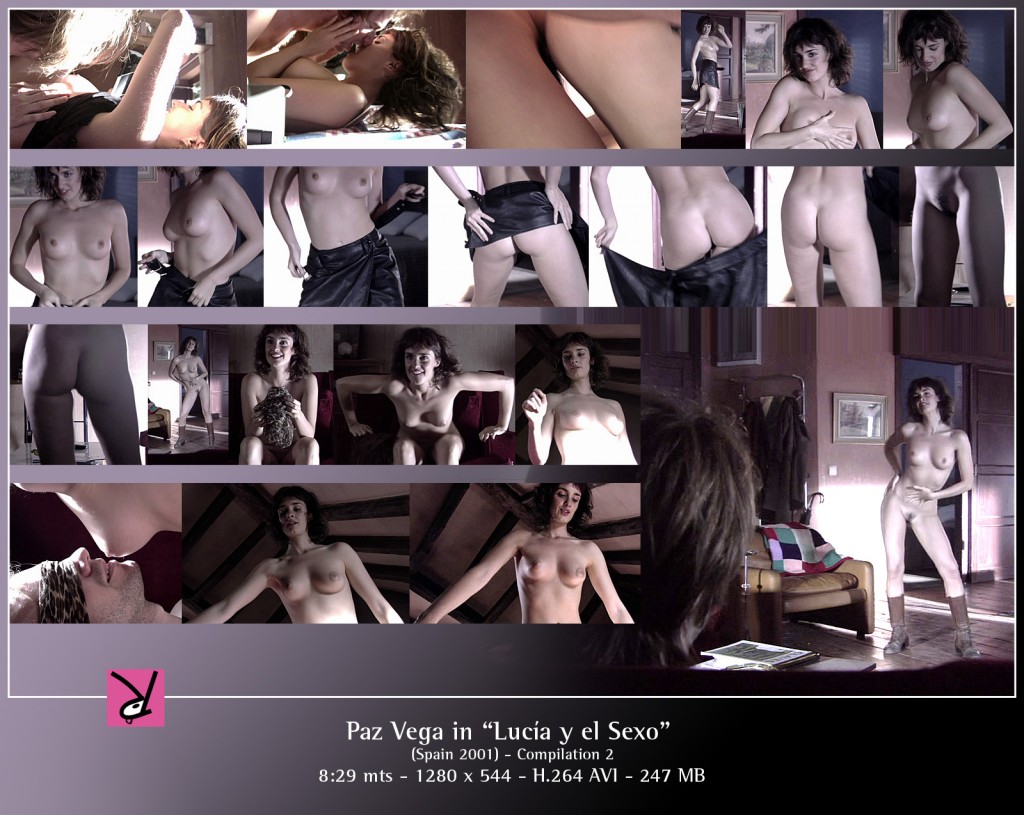 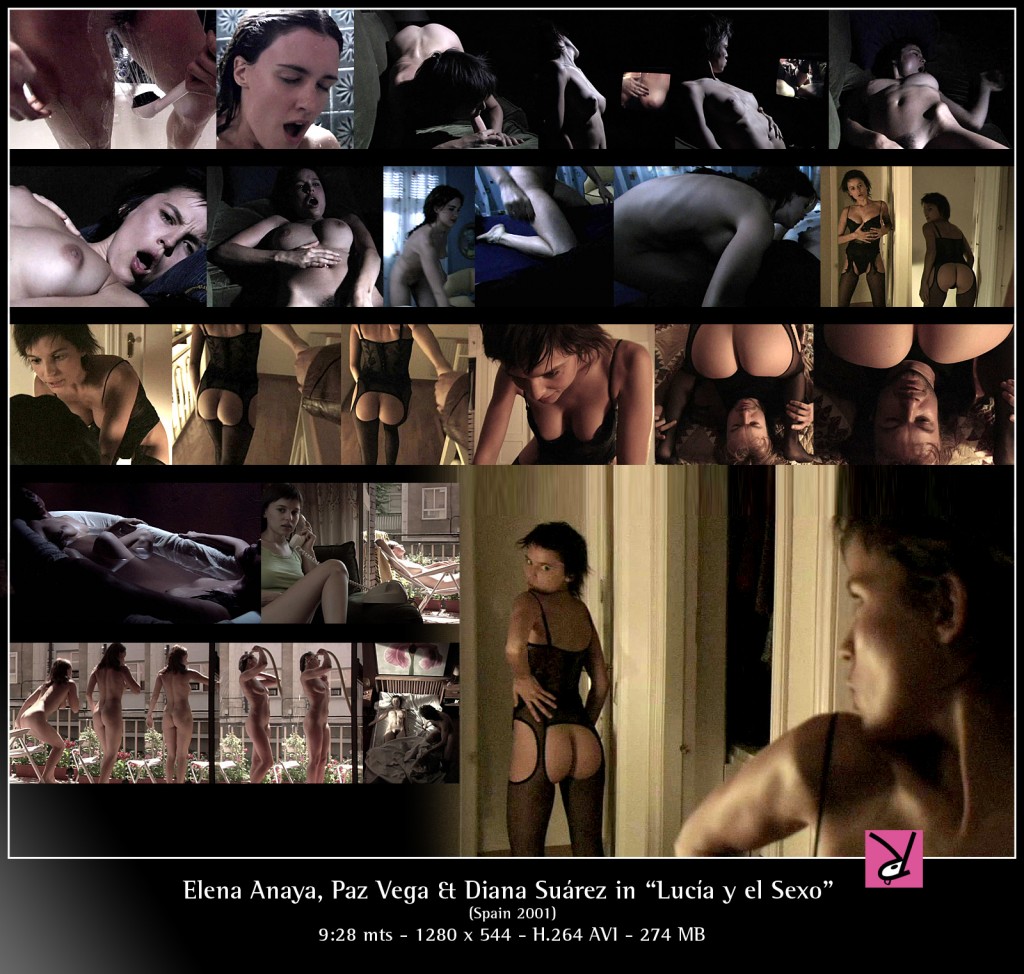 A young Elena Anaya and Paz Vega are the highlight of this compilation in Julio Medem’s “Lucía y el Sexo”.