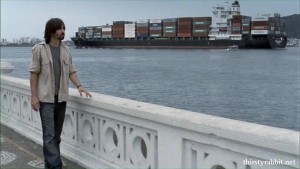 I ordered the DVD of Suzana Amaral’s most recent film “Hotel Atlântico” based on my experience watching her first film, the extraordinary A Hora da Estrela. It didn’t disappoint. Would you believe – the octogenarian has made only three feature films to date, and was already in her fifties when she made her directorial début! 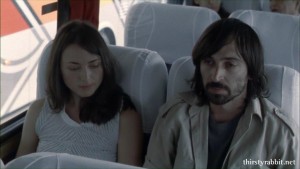 Hotel Atlântico starts with an out of work actor Alberto (Júlio Andrade) booking himself into the eponymous hotel. The following day, on a whim, he boards a bus heading south. He has no luggage, and his blank gaze give us the impression of someone trying to leave behind his past. He strikes up conversation with an attractive female passenger – a divorced Polish archaeologist (Lorena Lobato), who tells him her story. But the following morning he wakes up to find her dead in her seat. Not wanting to get involved, Alberto gets off at the next stop without raising the alarm. 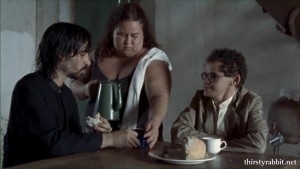 After an episode where he escapes with his life from a couple of hit men, Alberto stumbles into a village and takes refuge in the local church, thanks to a kind sexton (Gero Camilo) and his maid. But restless, he moves on to another town, where he’s run over by a vehicle and had to have one of his legs amputated. The doctor, running for Mayor in the local elections, uses Alberto’s celebrity status as an opportunity for PR, just as his daughter Diana hopes to seek fame through her association with him. 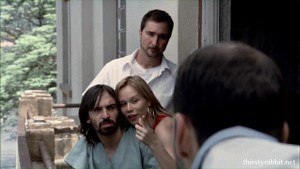 The person not trying to benefit from Alberto’s misfortune is the nurse Sebastião (João Miguel), whose only dream is to get away from town and see the sea – he’d so far only seen it on TV. Alberto asks if he could join him. The two will soon leave the hospital and set out towards the coast… 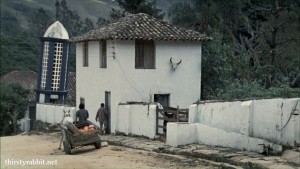 Alberto’s Kafkaesque adventure, laced with absurd humour, is also tinged with an air of melancholy. The puzzling final scene will either stupefy you or make profound sense, depending on the extent to which you relate to the main character. Even after the credits start rolling, we won’t really know much about Alberto, nor the reason for his torment whilst every other character he encounters remained an open book. But we think and feel for him all the same. We’re also constantly reminded of death during the course of the film – characters we get to know suddenly die on him, and sometimes Alberto himself is faced with unforeseen danger. 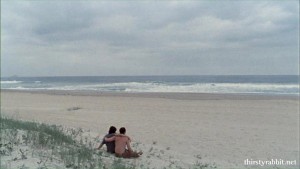 Amaral doesn’t feel it important for the audience to know Alberto inside and out, the reason behind his wanderings and his indifference to the world around him. She’s more interested in his journey and invites us to join in too. The resulting film is quirky, offbeat, but nevertheless engrossing, as we watch people, places, and absurd goings-on shown with a mixture of irony and humour.

Suzana Amaral’s relatively thin filmography is a mystery, but going by this film, and the ‘making of’ documentary included in the DVD (thankfully, with subtitles), she has a keen directorial eye, and her command over the medium – both in terms of idea and technique, is evident everywhere – she really ought to be making more feature films. Even if it is set in Brazil, Hotel Atlântico has a universal appeal that’s as relevant and contemporary as her powerful début feature A Hora da Estrela – Highly Recommended Viewing..!

The Nudity: Mariana Ximenes
There is brief nudity in a scene when Diana (Mariana Ximenes) tries to have her way with an Alberto still recovering after an amputation, in the hospital’s chapel.

Mariana Ximenes and Júlio Andrade from the film, “Hotel Atlântico”.