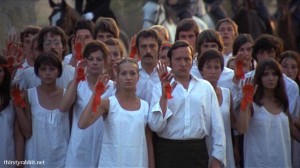 Miklós Jancsó was among the few gifted Eastern European directors to ever gain fame and recognition on the other side of the iron curtain. His best works unfortunately came about during the height of the Cold War, where his vast skills and cinematic innovations were lavished on films that were for all intents and purposes, little more than propaganda-pieces. He did present differing viewpoints however, but his own convictions always overshadowed the rest. Even when he did manage to make films outside Hungary, they retained their political tone, espousing a socialist message that sometimes also leaned towards anarchy and libertarianism. 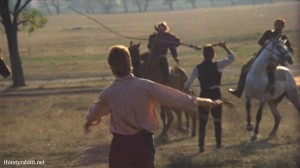 I begin his filmography with the spectacular Cannes-awarded “Még kér a nép” [Eng. Title: Red Psalm] with an eye on events happening in neighbouring Ukraine at the time of writing. Jancsó had a different agenda – presenting socialism as an idea that’s still relevant to a younger generation, post Prague 1968. What we see in the film is the cinematic equivalent of a lofty Diego Rivera mural, replete with fervent peasants joining hands to demand their fair share from landowners, and rifle-wielding soldiers deployed to forcefully put down their revolt. 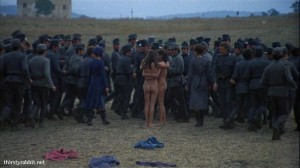 Set in 1898 and performed like a stylised ballet, the film borrows passages from The Bible and gives it a ‘red’ twist. Eulogising women, local tradition, and folklore, it highlights the exploitation of masses by the elite and also depicts the Church as part of the problem. When peasants kill one of their oppressors, the army is called in, and despite some of them refusing to shoot unarmed peasants, they do get massacred. 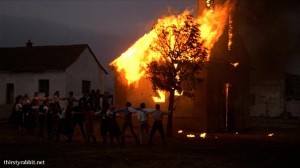 More than its message, the reason this film is special is because of the way in which it was made. The revolt and the resulting reaction are shown poetically, rather than literally. The film is entirely made in the open, comprising of no more than twenty eight intricately executed shots. The director narrates events simultaneously happening on his grand outdoor canvas by zooming into one section of the landscape and following a piece of action there before panning to another – he conducts the cast and crew with astonishing and seamless precision. 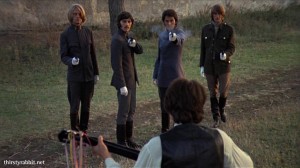 An impressive accomplishment in itself, Jancsó will even better these choreographed action sequences in his next feature Szerelmem, Elektra (Electra, My Love). Some of his earlier films are masterpieces in their own right – and I’ll be writing about them as well, but Red Psalm (alongside Electra) is unique in its assured adaptation of an archaic vocabulary that has had its origins in cave art, namely murals, and in the process it succeeds in expanding the scope of cinema itself. At least for this reason, the film is Highly Recommended Viewing..!

The Nudity: Ilona Gurnik, Erzsi Cserhalmi, Éva Spányik etc.
In one lengthy scene, three young peasant girls are encouraged to strip naked in order to dissuade soldiers from slaughtering them. In another scene, dancing and cheering men help brides into a bath tub. There is also unintentional nudity from Andrea Drahota when she leans forward to support a fiddler who’d just been shot.