Gabriel Mascaro makes a refreshing feature film début with the quirky slow-burning drama “Ventos de Agosto” [Eng. Title: August Winds]. Yes, it’s a drama only in the broadest sense of the word, but that shouldn’t distract from the high traditions of film making that it draws from. 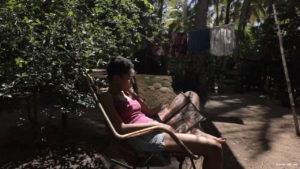 Set in a remote northeastern coastal village of Brazil, the film focuses on the lives of two young people; one is Shirley (Dandara de Morais) – a rock music loving city girl who had moved to the village to look after her elderly grandmother. For a living, she drives a tractor transporting coconuts from a local plantation, but she yearns to become a tattoo artist and practices her skills on the unfortunate farm animals at her home. 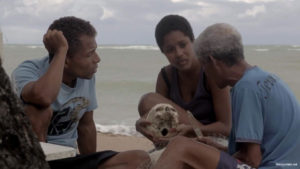 Shirley goes out with a village lad and co-worker named Jeison (Geová Manoel Dos Santos). They spend some of their free time in a little dinghy on the sea, where Jeison free-dives to catch octopus and other sea creatures while Shirley catches some sun (until this film, I never knew a fizzy drink could double up as sunblock!). On occasion, Jeison recovers unusual artefacts like skull and bones from the sea bed, whose history they’ll try to identify by enquiring around the village. 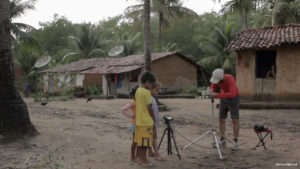 A meteorologist researching the pattern of trade winds arrives in their village in August, since that is also the month for tropical storms and high tides in the area, and he sets about recording the sound of the winds as part of his study. The village folk erect sand barriers to try and protect their properties in anticipation of the torrential downpours and curiously watch the meteorologist go about his work. 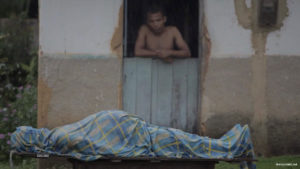 Shortly after, a bloated corpse half-eaten by fish surfaces, and Jeison takes it upon himself to become its custodian until the police arrive. But they don’t, and Jeison will eventually have to do something about the rotting corpse at his doorstep. We watch the unfolding drama as the elemental forces of nature – life, death, the sea, and the August winds play out their parts unstintingly and unapologetically, in a world that is changing… 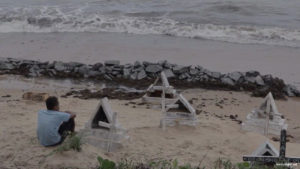 Much of the film is observational – like a documentary, but serves us ample opportunity to reflect upon what we see on the screen. In a style reminiscent of Corn Island, but altogether more celebratory, witty, and life affirmative; it is a beautiful portrait of a corner of rural Brazil that we don’t often see but which has universal appeal. Gabriel Mascaro is an exciting director whose work we need to keep an eye on, and I’m already looking forward to his second feature that should be out soon. Needless to say, the film is Highly Recommended Viewing..!

The Nudity: Dandara de Morais and Geová Manoel Dos Santos
There are a couple of scenes that feature some delightfully frank nudity; the first is when Shirley sunbathes nude in the boat, and the second is after Shirley and Jeison make love on top of harvested coconuts in their tractor truck. They’re worth checking out!