For a long time, it had been fashionable for critics to trash every Nicolas Roeg film made after “Bad Timing”. Thankfully, we now have a whole new generation that’s not only rediscovering his later films, but also reevaluating them within the context of his entire body of work. “Eureka” (1983), partly inspired by a true story, was the first of his ‘later’ films to be routinely overlooked due to the changing expectations of a fickle audience. 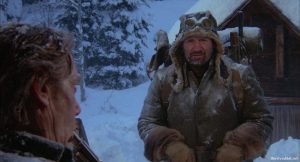 The film follows the fortunes of Jack McCann (Gene Hackman), a perseverant gold prospector made good after striking it rich in the frozen wilderness of Canada. Split into three distinct parts, the first part of the film is dedicated to McCann’s heroic quest amongst the debris of broken hearts and shattered spirits that came seeking fortune before him. The surreal journey he undertakes takes on a mythic proportion as elements of magic and providence are woven into the narrative. 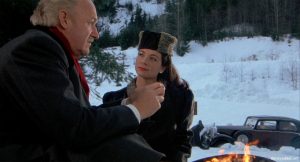 The film fast forwards twenty years into the future immediately after, where McCann is the wealthiest man in the world, watching helplessly as his daughter Tracy (Theresa Russell) falls madly in love and marries a handsome idler named Claude (Rutger Hauer) – he suspects that Claude might have married her only for the money.

Around the same time, Miami businessman Mayakofsky (Joe Pesci) wants to convince McCann into selling his Caribbean island named Eureka to set-up a Vegas-style casino town, with the help of McCann’s close associate Charlie Perkins (Ed Lauter), and using his lawyer-sidekick Aurelio D’Amato (Mickey Rourke) as the go-between. He devices dubious methods to obtain the property, but McCann isn’t interested in selling it. 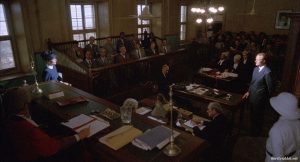 The final part of the film deals with the aftermath of McCann’s horrific murder and the shoddy trial that ensues when Claude is accused of murdering his father-in-law. Claude argues his own defence by calling in Tracy as a witness, but will learn to his discomfort that Tracy, far from being his ‘trophy’ wife, was the one to initiate the seduction – it was she who chose him, rather than the other way around.

Tracy defends his innocence by proclaiming his incapacity to hold any true convictions in life, let alone love. Through her courtroom testimony, she also summarises her slain father’s life with a surprising insight that will go some distance in completing the portrait of the real McCann behind the adventurer and doting father of the first two parts of the film…

Defending “Eureka”:
If this event-rich film would’ve started off as an action adventure, and progressed into a tragedy-filled family melodrama, some critics would’ve probably been satisfied with its outcome, and perhaps even an Oscar red-carpet would have beckoned if a ‘final justice’ of sorts for the tragedy had been served. 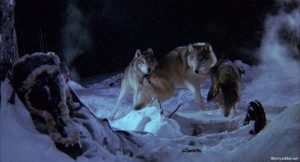 But this is a Nicolas Roeg film – whose stylised film narrative and surreal moments, briefly interspersed with tantalising, but brilliant glimpses into the psychological, philosophical, and mystical aspects of the human psyche – into reasons behind motives, are as adored and appreciated in films like Walkabout and Don’t Look Now. “Eureka” is no different in its approach from his other better appreciated films, and it is baffling to come across suggestions that Roeg could’ve gone about it differently. 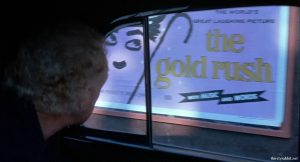 For Roeg, finer details, or even the plausibility of a plot had always been secondary; instead he was more interested in the effect that events have on the characters concerned. McCann is a man of action and very few words, and once his destiny of finding gold was complete, there was nothing left for him to achieve – in his own words, “Once I had it all. Now I just have everything”. Hence there was need for a mouthpiece – Tracy in this instance, to elucidate McCann’s reasons for struggling to negotiate his remaining days. 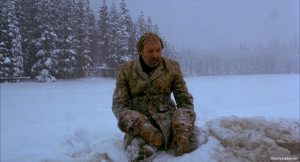 There’s a reason why twenty years of his life following the gold discovery is not shown. The film is essentially about the leftover part of McCann’s life; it is not about seeing him accumulate wealth, get married and purchase whole islands. Also, without going into the details, the cryptic final scene with ‘unanswered questions’ is indeed typical of Roeg. You’re free to interpret and judge the characters appearing in the final scene in your own way; all that Roeg wants to convey is that Eureka “will be given away”. Considering the problems the film faced during its distribution, we don’t know if the final cut that we see is also the way Roeg intended, but even as it stands, this is an exceptional (and woefully underrated) film by Nicolas Roeg that’s Highly Recommended Viewing..!

I’m thankful for this excellent Blu-ray release – the copy I had so far was a poorly transferred letterboxed NTSC DVD. It is about time the rest of Nicolas Roeg’s films are also remastered and brought back to life for a new audience.

The Nudity: Theresa Russell, Rutger Hauer, Emma Relph, and Ann Thornton
Theresa Russell is at her most elegant and sensual self in this film, and also appears nude or partially nude in at least five scenes. For a Dutchman, Rutger Hauer’s English diction is impressive, and he too appears nude in one scene. Emma Relph and Ann Thornton play wives of colonial British officers who get more than they bargained for after Claude takes them to an outlandish ‘voodoo orgy’, if ever there was one, where an uncredited actress is also seen trying to swallow or do some harm to a hapless python – bloody expats! 🙂