Marco Bellocchio returns with his kin to give us two hauntingly connected tales from different times in his drama “Sangue del mio Sangue” [Eng. Title: Blood of My Blood]. 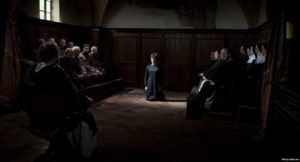 The first half of the film is set in a cloistered convent in seventeenth century Bobbio. Young nun Benedetta (Lidiya Liberman) is accused of ‘bewitching’ a promising priest, who commits suicide upon discovery of their affair. To redeem his honour so that his remains could be reburied in a proper cemetery, Benedetta needs to ‘confess’ worshipping the devil – his brother and man of arms Federico (Pier Giorgio Bellocchio) is told by the priest conducting the hearing. 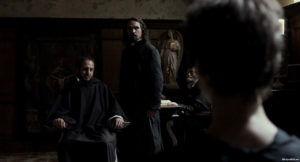 Upon witnessing the horrors heaped upon Benedetta in the name of cleansing her spirit, Federico, who had already fallen under the spell of her beauty, is torn between allegiance to his dead brother’s soul and his desire for Benedetta. The inquisition is also witnessed by a mysterious cardinal (Roberto Herlitzka). 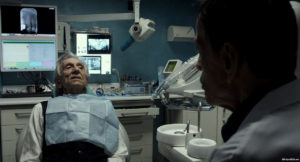 The second half of the film moves to present day Bobbio, where the convent, now a disused prison, is about to be sold to a Russian tycoon. Unbeknownst to them, a frail old Count Basta (Roberto Herlitzka) resides in it, and only ever ventures out in the night. His canines are now causing him pain and he has long given up sucking illegal immigrants’ blood. Having ‘disappeared’ from public life nine years ago, his existence is accidentally discovered by tax inspector, estate agent, and con-man Federico (Pier Giorgio Bellocchio). 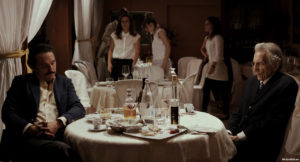 It transpires that Count Basta still calls the shots in town when it mattered, thanks to his masonic group of fellow vampires, who continue to run the town’s important affairs in one form or another. He nevertheless needs to stop his lair from being sold and sets out in the night to personally deal with the issue… 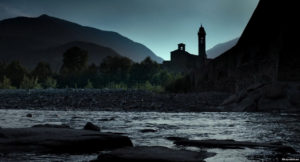 By juxtaposing characters across seemingly different tales, Bellocchio is obviously drawing parallels by suggesting that the ‘dark’ ages hasn’t quite ended after all. Just as religion overwhelmingly influenced people’s lives during the medieval ages, the affluent and people in authority in today’s world too treat the general populace as children and dictate how they should live their lives. Both the tales reach a satisfactory ending during the final moments of the film, which features fine performances and is also ably supported by its atmospheric cinematography – especially the ‘gothic’ first half. There may be some loose ends like the Perletti sisters and the madman, but we get the film’s message all the same. Of particular interest would be the authentic looking inquisition which Bellocchio had already worked on in an earlier film (La visione del sabba). Highly Recommended Viewing..!

The Nudity: Lidiya Liberman
In a brief scene, Benedetta emerges in the nude.