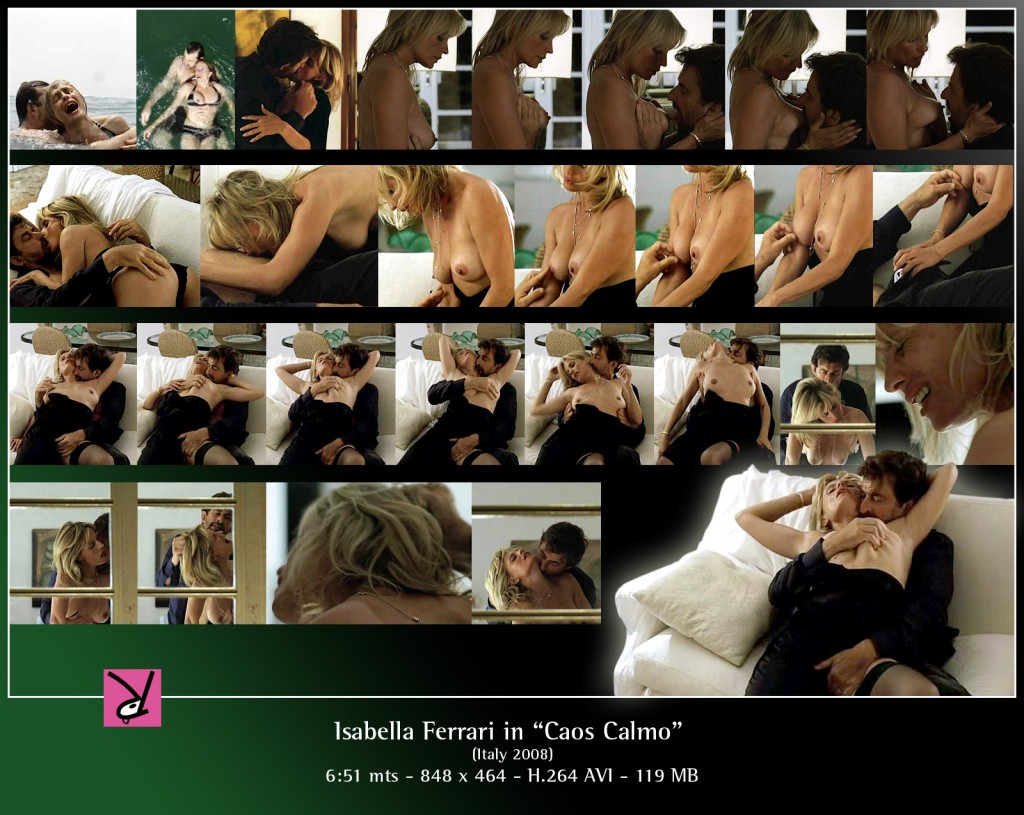 Isabella Ferrari has a steamy encounter with Nanni Moretti in the 2008 Italian film, "Caos Calmo"

Pietro, a successful executive returns from a day out at beach with his brother to find his wife had just died after taking a fall. The rest of the film is about Pietro reconciling with the past and finding a new direction in his life. He refuses to go back to work where an important merger is happening and spends all his day at the park outside his daughter Claudia’s school. He meets some interesting characters while waiting to pick up Claudia, and during the course of the film, a kind of distant bond develops between him and these characters. His friends, colleagues and relatives allow Pietro to keep to this routine, in the belief that he is still mourning his wife’s death.

The very little background we’re given about his life was that he probably wasn’t ‘in love’ with his wife when she died, and had had fleeting affairs with his insecure sister-in-law Marta in the past (played by the ever-so-delectable Valeria Golino). But we find it hard to relate to Pietro, who after all seems to have no financial worries despite not turning up for work, always drives a gleaming Beemer, and lives in a world far detached from the ‘real’ one. He is not particularly considerate, and is in a way merely ticking some boxes from a checklist, a la Earl Hickey – his list of emotional shortcomings.

A lot of effort has been invested in production values, but the film comes across as a hybrid between a TV drama and a typical Hollywood film. The film doesn’t feel ‘Italian’ at all, not even ‘European’.

And now to the infamous sex scene, which was branded ‘obscene’ by the Vatican. Pietro (played by well known director Nanni Moretti) invites over a married Eleonora to his holiday home and has wild sex. Even though it isn’t explicit, it is pretty clear they are actually fondling one another – I haven’t seen a major actress getting groped on film the way Isabella Ferrari does for a long time. And it goes on for nearly four minutes, and yes, there is something vulgar about it.

First of all, this scene is completely at odds with the rest of the film. We don’t expect Pietro to behave that way – not once does he even express an inclination for sex. But it is entirely justified in the context of his state of mind – this is not about his sexual desire or prowess, but a manner of exorcising his ghosts. Pietro rescues hitherto stranger Eleonora at the beach at around the moment his wife was falling to her death. He himself could have drowned during the rescue, and no one even bothers to thank him afterwards. More importantly, the out-of-the-blue sexual encounter is more of a fantasy than reality because it ends abruptly, we never get to see Eleonora again, and whatever dialogue they’ve had since the rescue doesn’t logically extend to the sexual act. That’s why I’ve combined in this compilation both the rescue and the sex scene as they are definitely connected – you will see that during the rescue, Pietro even readjusts Eleonora’s bikini top when one of tits start hanging out. But I’ve also inserted an unrelated scene of Valeria Golino – Marta tries to take her clothes off in public after having parking trouble (women, eh!) – she apparently does this every time she’s in distress – taking her clothes off, that is..! 🙂