Vasilis Georgiadis: From the ‘Golden age’ of Greek cinema

Vasilis Georgiadis can arguably represent the ‘golden age’ of Greek cinema between the mid-fifties and the late-sixties, during which film makers were generally allowed a degree of creative freedom never seen before. This is mainly because his films were decidedly ‘mainstream’ in their attempt to connect to ‘common people’, and were also executed with a great degree of craftsmanship and care. Two of his films from the period that are relevant to this site are “Ta kokkina fanaria” [Eng. Title: The Red Lanterns], and “To homa vaftike kokkino” [Eng. Title: Blood on the Land]. Incidentally, these are also among the very few Greek films that were nominated for Oscar during its ‘Golden age’. 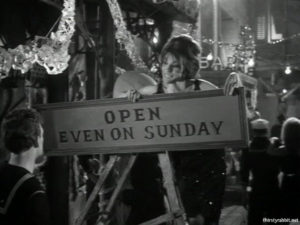 Set in the southern port of Pereas, the film delves into the lives and fortunes of prostitutes in one of the brothels of the town’s red light district – one that has been marked for demolition by civic authorities in order to make way for new development. 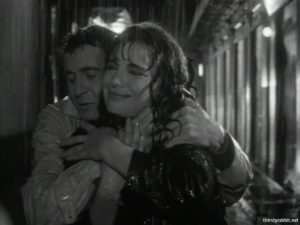 We follow Eleni (Jenny Karezi), Mary (Mairi Hronopoulou), Anna (Alexandra Ladikou) and others who are managed under the watchful eye of Madam Pari (Despo Diamantidou) and pimp Doris (Kostas Kourtis). Eleni is a Romanian immigrant who was abandoned by her lover at the hotel next door, and has eventually been forced into the profession to survive. But she occasionally manages to escape her routine to meet up with a man (Dimitris Papamichael) she’s in love with, but who’s totally unaware of what she does for a living. 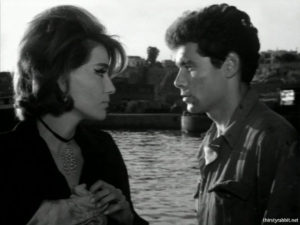 Mary takes a shine to a young lad (Faidon Georgitsis) who first visits her as a client. He falls in love with her and also proposes marriage, but Mary, whilst also in love, is only too aware that it wont be that easy, either for his family to accept a prostitute for a bride, or for her to give up the relative independence she presently possesses in charting her own life. 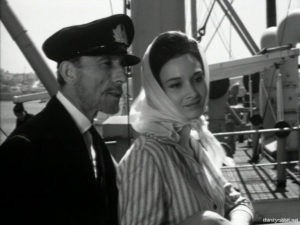 Anna’s elderly client (Manos Katrakis) is captain of a merchant vessel who’s about to retire. When he proposes marriage, and also evinces a desire to help raise a family, Anna had to disclose a closely held secret that she is already mother to a twelve year old, and would consider marriage only if he’s willing to accept them both. Whilst the captain is happy to accommodate the two, things don’t turn out as intended. 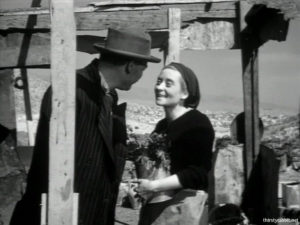 The film is notable for its star cast – almost everyone in the film were household names when the film was made. Apart from the plot, the film makes some pertinent observations of a changing society and the hopes of the poor, represented by the brothel’s middle aged live-in maid (Iro Kyriakaki) who now needs to make a new start of her own. Her character is probably the least developed among the rest, but the Italian neorealism inspired film is nevertheless honest in its intentions and makes a concerted attempt at addressing some of the social issues of the time. Recommended Viewing..!

The Nudity: Eleni Anousaki
Eleni Anousaki plays Myrsini, a young teenager who takes to her new profession like a duck to water. She’s topless in a scene, and teases the pimp after he barges into her room while changing.

Eleni Anousaki in the Greek drama, “The Red Lanterns” aka “Ta kokkina fanaria” [1963]. 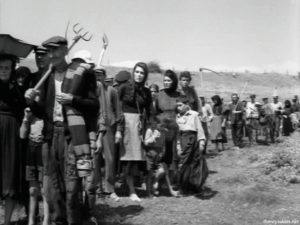 Set in the rugged hinterland of Thessaly in early twentieth century, “To homa vaftike kokkino” [Blood on the Land] paints an astonishing portrait of a rural Greece that has yet to enter the modern era save the solitary railway line connecting it to the outside world. The film is essentially about a feud among siblings within a noble family. 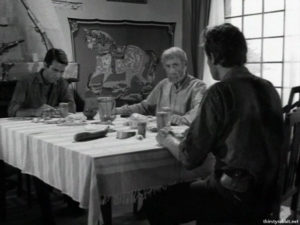 The film begins with a youthful Odysseas (Nikos Kourkoulos) returning home after a stint in prison for abetting a revolt among peasants working in the family land. After the revolt was put down by force and several peasants killed, the patriarch (Manos Katrakis) had fired the entire workforce and taken on labourers from outside their territory with the help of his elder son Rigas. 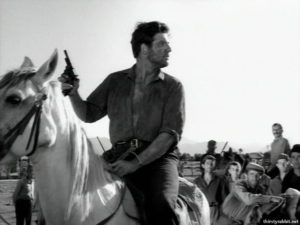 Rigas (Giannis Voglis) is the polar opposite of Odysseas – brutal, predatory, and dictatorial, who actually believes he owns the people working in the land. He detests Odysseas for wanting to distribute their ancestral land among the peasants, and refuses to reconcile with him despite their father’s pleas. 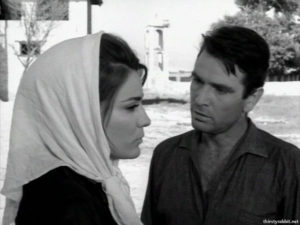 When Odysseas convinces his father to allow the ousted peasants to return back to the land for work, Rigas resists and fails. The peasants have also found a new leader in Eirini (Mairi Hronopoulou), the daughter of a killed peasant leader, who is literate and can negotiate better working terms on their behalf. What starts off as ideological warfare between the brothers turns into rivalry over Eirini even though she only wants to be with Odysseas, and their feud will reach its anticipated denouement in a guns-blazing finale… 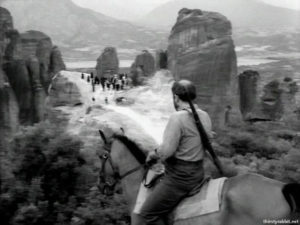 One wouldn’t go as far as calling this Greece’s equivalent of “Gone With The Wind”, but as a pastiche of Socialist Realism, it is grand nonetheless, drawing on themes from Mexican Westerns and their own classical literature. Not only was it well received, as expected, in the Eastern Block countries, it also found favour among Greek audiences and film festivals. With major stars among the cast, the film was a Greek cinematic landmark of its time, and rarely would such an ambitious project – both in budget and scope, be undertaken by Georgiadis. The black and white cinematography, although excellent, doesn’t quite do the spectacular terrain enough justice, but for those interested, the same location can be seen majestically captured in colour in a more recent film (Metéora).

The Nudity: Zeta Apostolou and Mairi Hronopoulou
Zeta Apostolou, already legendary for her racy roles when the film was made, plays an opportunistic vixen sleeping her way out of misery – she appears nude in two scenes. There is also very brief hint of nudity from major star Mairi Hronopoulou when her character is caught bathing in a pond during a scene shot from a distance.

Zeta Apostolou and Mairi Hronopoulou from the Greek Western “Blood on the Land” [1966].