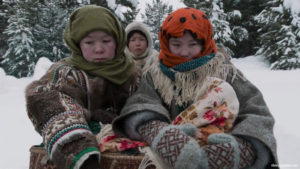 There’s now plenty of proof that Aleksey Fedorchenko has a deep reverence and fascination for the customs of ethnic tribes that cohabit his motherland. While his moving Silent Souls (2010) touched on the funerary rituals of the Merya, and his richly exotic anthology Celestial Wives of Meadow Mari (2012) boisterously celebrated Mari womanhood, his more recent “Angely revolyutsii” [Eng. Title: Angels of Revolution] is an unfettered re-imagining of a factual Soviet suppression of the Siberian Nentsy and Khanty people during the Kazym Rebellion. 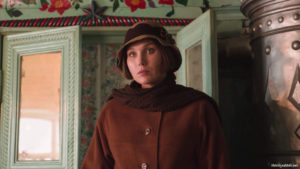 But Fedorchenko, being who he is, doesn’t present the film with a conventional historical narrative, but rather like a poetic retelling of a myth; exercising generous artistic license while presenting his facts. There are true-life characters nevertheless in the film, like Polina (Darya Ekamasova), a noted revolutionary and performance artist, who is assigned the task of ‘civilising’ the aforementioned tribes; by encouraging them to embrace Soviet ideology, join mainstream society, and give up their pastoral lifestyle and move into permanent homes in their newly built town. 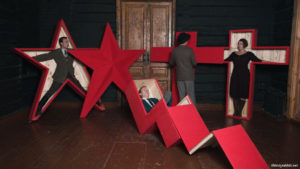 To this effect, she enlists the help of four fellow avant-gardists; film maker Pyotr (Pavel Basov), photographer and sculptor Zakhar (Georghi Iobadze), architect and coffin-maker Nikolay (Konstantin Balakirev), and theatre director Smirnov (Aleksey Solonchev). Together, they set off to the Taiga on a mission that Polina hopes would intellectually enlighten the tribes and make them appreciate modern art. 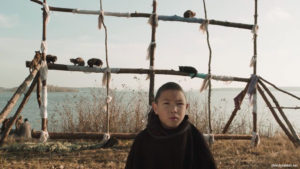 But the Khanty are aloof to this enforced ‘meeting of civilisations’, and at times barely tolerate their uninvited presence. While they might have been mildly bemused watching their works and antics at the beginning, they soon grow tired of them and refuse to ‘join the collective’, and events take an inevitably tragic turn once their respective irreconcilable positions are established, and the State decides to have the last say… 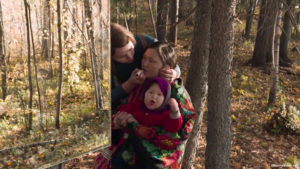 There is more to the film than meets the casual eye – be it artistic, political, or philosophical. Federchenko doesn’t make it any easier for us by refusing to feed us the historical pretext for the conflict. In my case, one had to score through festival interviews and the wiki to get acquainted with collectivisation during the early days of Soviet Union. It is ironic that the avant-garde artists, themselves a minority who’ll soon to be ‘collectivised’ by the state, were press-ganged into persuading other minorities. It is also worrying to see that states; red, blue, or whatever their hue, have found it irresistible to homogenise their entire population to control them better – it shows how incredibly fragile human civilisation has always been. 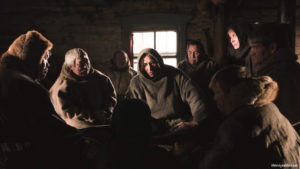 Fedorchenko’s film provokes debate on ethics, ideology, and humanism itself. And after the final scene in an apartment in present-day Kazym, in which we see an elderly Khanty woman singing a tribal song while looking into the camera, we are left wondering who the angels of revolution indeed were – were they the avant-garde artists who were sacrificed for a now defunct Soviet state, or are they the disparate tribal cultures that still survive, albeit by the skin of their teeth, a quarter of a century after the revolution itself has ended. 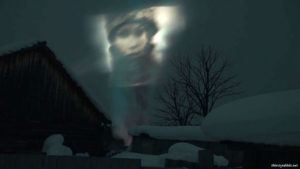 To say that the cinematography and production design is exceptional would be stating the bleeding obvious – one can hold a photographic exhibition by simply blowing up some of the film’s key frames and mounting them on a wall. They would need neither titles nor descriptions – quirky, surreal, humorous, and tragic, they’d be probing artworks on their own. Of course, good photography doesn’t equate to good cinematography, but films with a master like Fedorchenko at the helm make a pleasant exception. A particularly mesmerising scene is still haunting – where Pyotr projects his film on a cloud of smoke bellowing from a wintry night’s campfire. I could go on – but will end by stating that this gem is Highly Recommended Viewing..!

The Nudity: Polina Aug
Polina Aug plays Anna, Zakhar’s model and muse, and briefly appears topless during one of the photo shoots.