My favourite Julio Medem film happens to be a love story – or a fantasy even… 🙂
“Los Amantes del Circulo Polar” [Eng. Title: Lovers of the Arctic Circle] is quite possibly as intense as love stories get. Outwardly like all his films, it tells a straightforward tale, but what makes it special is the multiple layers hidden within it, some of which are so deep that it makes you marvel at Medem’s insight into human nature – I mean, he was barely forty when he wrote this, but there’s a lifetime’s wisdom stacked within it. What is even more breathtaking is the manner in which he had translated this into film, which is, and I dread to use the phrase, almost perfect.

One might think I’ve begun to see things after repeat viewings, but I’m not the only one who feels this way. And yes – you certainly have to watch it more than once to experience its inner beauty because the first viewing will be consumed by the film’s exterior. Gonzalo Berridi’s breathtaking cinematography, the impressive editing that goes with it, the haunting soundtrack, and not least the incredibly beautiful people in it, young and old, see to that. The film’s not just a work of visual art, but an intellectual exploration of ‘love’, ‘destiny’, and… ‘circles’!

Storyline:
Delightfully whimsical but truly deep, Medem uses palindromes and patterns to propel his story – Otto’s son is Alvaro and another Alvaro’s son is Otto. Otto loves Ana, both names palindromes. What is chance and what is destiny – little Otto and Ana meet under the sweetest of chances – Otto while chasing a ball and Ana running away from her mother – upset to learn her father had just died in an accident. They never stop loving each other since that moment. But the same Otto and Ana, years later sit almost next to each other without even noticing, ironically at a plaza in Madrid historically renowned as a meeting place. Medem uses the circle as a metaphor, like the Arctic circle where the sun never sets i.e., timeless, and where Otto reunites with Ana – they’d now created their own little circle of space just for themselves. Or cyclical events like Otto becoming a pilot, just like the other Otto years before. Otto also jumps off a plane, like his older namesake – both end up meeting a Spanish woman. Medem obviously enjoys telling us stories this way, as we can see this circular pattern repeated in his later film “Lucía y el Sexo” too. Apart from these surreal and poetic explorations however, there is a poignant story to tell, that of Ana and Otto’s quest to somehow try and find a way to live together – for society will simply not allow their relationship – they’ve become step-brother and sister after Otto’s divorced father marries Ana’s widowed mother. He does this beautifully.

I couldn’t resist including this scene to sample the genius of Julio Medem, his sense of humour, and this simply brilliant piece of editing. Ana knows that Otto is on his way to see her. She is no longer waiting for a happy coincidence, which otherwise was what her story until then. Just watch this…

Among the DVD extras is a mundane looking ‘Making Of’, but which manages to at least give us a glimpse into Medem’s thought process. The interviews with some of the stars also showcases Medem’s remarkable genius as a director, because while they’ve rightly seen things from their viewpoint, what the film achieves as a whole is a couple of notches higher. As for the DVD itself, it is crying out for a remastering. The film also appears in the Julio Medem box set, but the quality is poorer than the edition sold individually, and that’s what I’d recommend. If you can afford to buy only one Julio Medem film in your entire life, let that be “Los Amantes del Circulo Polar” – Highly Recommended Viewing..!

The Nudity: Kristel Díaz and Najwa Nimri
There’s only brief nudity, but it is such a magical film that it needs to be recorded here. 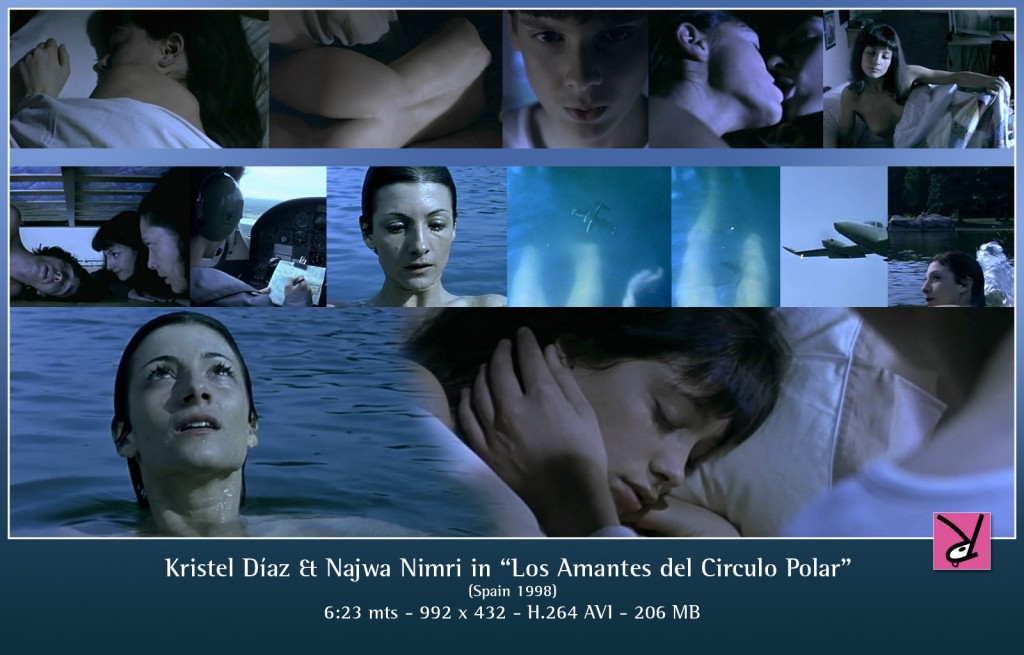