Emir Kusturica declares his genius in no uncertain terms with his memorable feature-film début titled, “Sjecas li se, Dolly Bell” [Eng. Title: Do You Remember Dolly Bell?]. While it might not be as loaded with nuanced symbolism as some of his later films, it is nevertheless an exquisitely crafted gem of unadulterated cinema that every young film maker could draw inspiration from. 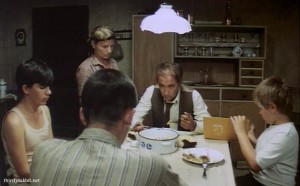 Set during the school summer holidays of 1960’s Sarajevo, the film follows the coming-of-age of Dino (Slavko Stimac), growing up in a caring working class family under the watchful eye of patriarch and ardent communist Maho (Slobodan Aligrudic). They live in a run-down tenement awaiting their turn to move into government allocated quarters that are newly being constructed. Much of Dino’s time is spent loitering with delinquent kids in the neighbourhood, and experimenting his auto suggestion and hypnosis skills upon himself and his pet rabbit – a hobby frowned upon by Maho who believes that Marxism had already supplanted the German Idealism that Dino’s interests represent. 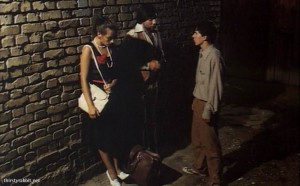 Dino tries his best to fit in with his neighbourhood pals, even while privy to some of their illegal activities. But for all his little digressions and keeping in bad company, Dino truly wants to better himself. It will also remain the crux of the film’s focus, as illustrated in Dino’s frequent mutterings, “Every day in every way, I’m getting a little better”. The ring leader of sorts within his group of friends is a pimp and human trafficker named Pog who sometimes went by the name of Sonny. As a favour, he asks Dino to hide one of his girls in his attic while he went away on business. 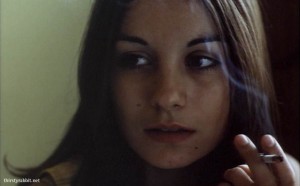 The girl, going by the name of Dolly Bell (Ljiljana Blagojevic) after a Parisian burlesque performer made popular through film shows at the local culture club, happens to be one of the girls that Pog intends to traffic to Italy. Dino would find himself drawn to her beauty and in the process, is also initiated into sex. 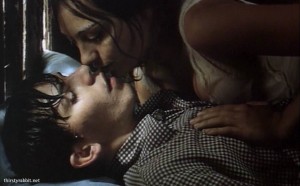 Dino will encounter his first experience of love and loss, after Dolly Bell is taken away and forced into prostitution. His hitherto critical father Maho, after learning about Dino’s affair and his valiant attempts to win back the girl that he loves, will come around to accepting Dino’s interests in auto suggestion and hypnosis, even encouraging him to keep at it – to get better in every way, through each passing day…

The film provides a unique perspective of Sarajevo and Socialist Yugoslavia that many in the West simply wouldn’t be aware of, but it would be hard to resist not searching for possible tell-tale signs or ‘premonitions’ of what would come later. There is a ‘telling’ scene in the film where Dino and his elder brother tussle in the background during a family get-together, and juxtaposed with the topic the family members are discussing, it is impossible not to make a connection with what we are seeing and what will be beamed into our television sets in twenty odd years time. The final parting shot in the film is also particularly poignant, in that it gives a birds-eye view of a half-built block of flats undergoing construction – full of promise and hope for the future. A similar scene would haunt us later – only they’d be half destroyed. In many ways, the film is an ode to Sarajevo, an upwardly mobile city that the director loved and grew up in, and which also embodied the aspirations of a young nation during the 60’s and 70’s. 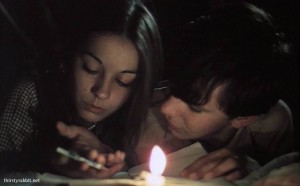 While comparisons can be made to Fellini’s “Amarcord” in terms of its subject matter, in its style and treatment, the film can broadly be compared to Italian neorealism. It is gritty and has an all too ‘human’ touch which we can instantly relate to, and which also makes it accessible to a global audience. The film can be considered ‘complete’ even as it stands, to the extent that there is very little that anyone could possibly add to enhance or improve upon the film’s message. While “Underground” still remains my favourite Kusturica film, ‘Dolly Bell’ comes in a pretty close second, making it without a doubt, Highly Recommended Viewing..!

The Nudity: Ljiljana Blagojevic
There is brief nudity from Ljiljana Blagojevic who plays the titular character of Dolly Bell while bathing and preparing to make love to Dino. But the film also features numerous scenes of a sensual nature that doesn’t feature nudity.

Ljiljana Blagojevic and Slavko Stimac in Emir Kusturica’s
“Do You Remember Dolly Bell?” [1981]