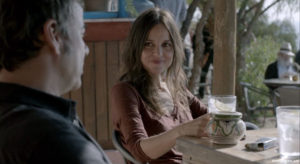 Imanol Uribe has frequently dealt with the subject of ETA and Basque nationalism in his films before – understandably so, since he also hails from the region. His latest thriller “Lejos del mar” [Eng. Title: Far from the Sea] too is no different and is set against a similar premise. 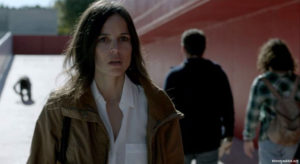 The film begins with former ETA separatist Santi (Eduard Fernández) arriving in Almería to meet a friend – he’d just been released after serving twenty two years for murdering a military officer in the presence of his eight year old daughter. The daughter, Marina (Elena Anaya), is now a doctor at the same hospital where Santi’s friend is undergoing treatment. Marina faints after recognising him, and Santi, not knowing that she’s the girl who saw him murder her father, carries her back into the hospital. 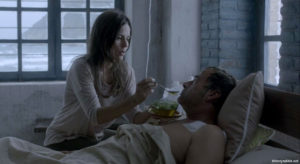 After recovering from her shock, Marina drops her son at her mother’s house in Madrid, picks up her father’s handgun and shoots Santi when she catches him alone on the beach. Having fled the scene, Marina returns to the beach after some deliberation to see Santi still breathing, but unconscious. She drags him back into his cabin to treat him for his wounds, and nurses him back to health. 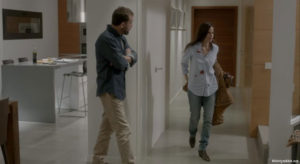 When Marina’s journalist husband Andrés (José Luis García Pérez) is informed of Santi’s release from prison and his arrival in Almería, he tries to track him down since he is also aware of Marina’s tragedy. When he informs Marina about Santi’s release, her ambivalent reaction disappoints him a little, but he nevertheless notices a change in her general attitude, and coupled with the increasing frequency of her ‘night shifts’, begins to suspect that she might be having an affair… 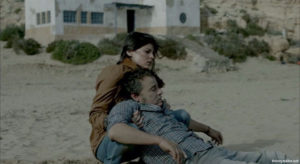 Uribe has dealt with the pathology of hate in some of his earlier films, but this one is slightly different in exploring issues bordering on Stockholm Syndrome, and it also directly addresses reconciliation, which could be a painful process. Obviously, Elena Anaya had the most challenging part in the film, but she performs impeccably as ever. While it is a low-budget thriller, it is still well made and some shot selections are an interesting departure from Uribe’s earlier films, particularly the long shot of Anaya’s character dragging a heavy and motionless Santi back into the cabin. We’re also shown an Almería completely devoid of its ubiquitous tourist-brochure glamour (or Spaghetti Western dustiness) – it might just as well be some bleak seaside in northern Spain. The taut thriller is certainly Recommended Viewing..!