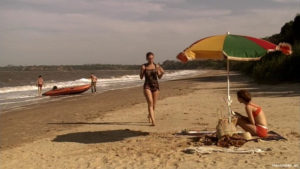 Margarida Cardoso’s maiden feature “A Costa dos Murmúrios” [Eng. Title: The Murmuring Coast] uses the backdrop of Portugal’s early struggles at holding on to its empire in Africa, to study a couple’s relationship that begins full of promise but falters as they get to know each other better. 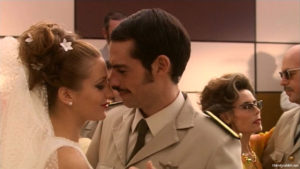 Set in the early sixties, we see a newly wed Evita (Beatriz Batarda) arrive at ‘picturesque’ Mozambique to join her husaband Luis (Filipe Duarte), a mathematician-turned colonel serving in the Portuguese Army. As she adjusts to the tropical climate, she notices that Luis had lost all the passion he once had for mathematics. 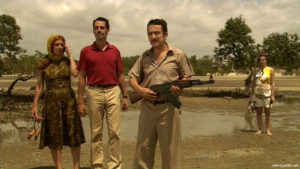 She’s nevertheless made to feel at home by Luis’s captain Jaime (Adriano Luz) and his wife Helena (Monica Calle). Evita also notices that Luis looks up to Jaime and often makes an extra effort to please his superior. This becomes disturbingly evident during a hunting safari where Luis tries to outdo Jaime in ‘exercising his fingers’ against a hapless wildlife using a Kalashnikov rifle. 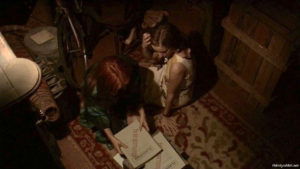 But a more sinister side to their camaraderie, and by extension Portugal’s colonial policies, is revealed when Evita spends time with Helena after their respective husbands go away on an army operation. The brutality against natives, it seems, is just another symptom of attitudes that they’ve willingly adopted from a bygone era where chauvinism and patriarchy is the norm, and duelling and honour killings, par for the course. A modern and liberated Evita struggles to come to terms with their world… 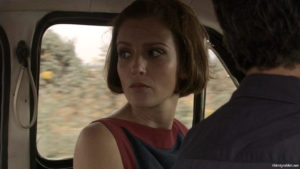 Cardoso uses a subject close to her heart – Portuguese colonialism in Africa, and through a documentary-eye, places her protagonist as a helpless bystander witnessing events from a distance – with the gathering clouds of resistance outside as much a reflection of her tumult within. It is an ambitious film, but it also succeeds to a large extent with its soul-searching. Recommended Viewing..!

The Nudity: Beatriz Batarda and Monica Calle
The film features some nudity, with Beatriz Batarda in a scene vaguely reminiscent of Kristin Scott Thomas from “The English Patient”. Monica Calle is briefly nude while emerging from the bath, and is later seen disrobed and left lying on the floor.