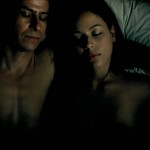 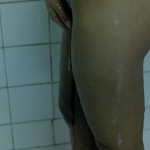 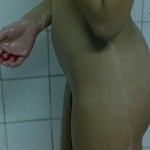 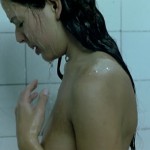 Sebastián Cordero’s 2009 film, “Rabia” [Eng. Title: Rage] is an unusual and original melodramatic thriller. At times it’s slow moving even by my own standards, but it is pretty well made, considering most of the film happens inside a mansion. I hate giving away the plot of thrillers, so I’ll just give a brief outline of what the film’s about.

José and Rosa are lovers, both immigrants, working in Spain doing the kind of work usually set aside for immigrants – he’s a construction worker, and she’s a live-in domestic servant for an elderly couple. When José gets fired for getting into an altercation with his boss’ friend, an argument with his boss ensues, and José accidentally kills the bugger. Wanted for murder, he hides in the mansion where Rosa works, unbeknown to her or anyone else. His logic – he doesn’t want the Police to pester Rosa, and the less she knows of his whereabouts, the safer for her. During this time Rosa also discovers that she’s pregnant. Rosa is played by the very cute Martina García – keep an eye as there’s more to come from this beautiful Mexicana in this blog.

In the only nude scene in the film, Rosa is worried she may have lost her baby, after noticing some bleeding while taking a shower. It’s only a brief scene but someone’s got to record it, right..? 🙂