After nearly a quarter of a century, Alejandro Jodorowsky, the Swiss Army Knife among provocative artists, conjures up a deeply personal film by adapting portions from his recently published autobiography. “La danza de la Realidad” [Eng. Title: The Dance of Reality] is also a family affair, with his wife and sons also chipping in for the project. His son Brontis, who many will remember as El Topo’s little son, plays Jodorwsky’s father Jaime, and his character is pretty much the main focus of discussion in the film. 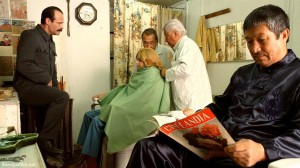 An autobiography with a difference, the film isn’t strictly a literal interpretation of events from childhood, but does contain factual details within a larger Jodorowskian canvas. It shows the early years of Alejandro (Jeremias Herskovits) growing up as a shy, white Jewish boy in the Chilean coastal town of Tocopilla. Giving insights into how he perceived the world around him back then and particularly his relationship with his parents, the now older Jodorowsky, as himself, enters scenes intermittently to comment on proceedings and mentor his younger self through his growing-up pains. 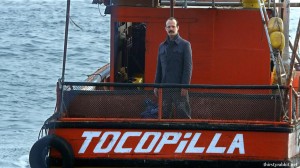 The film, while making several knowing references to his earlier work, is presented as a fairy tale – like a nostalgic look-back, Amarcord-style. But that’s where comparisons with Fellini end; because this one is a different kettle of fish altogether – almost every scene is a visual attack on your senses – it’s a wild fantasia, ranging from the lyrical to the exquisitely profane. As anyone who’d seen his earlier works should know, Jodorowsky doesn’t pull back anything if he’s out to make a point. He will use any means at his disposal to load it with layers of mystic metaphors and other hippie-delights. You see police throwing protesting limbless miners to the back of a truck, circus clowns bullying a child, a hunchback woman die for love, a buxom mother show her son how to go unnoticed by others in public – in the nude, and a loving wife healing her husband by urinating on his plague-infested body. 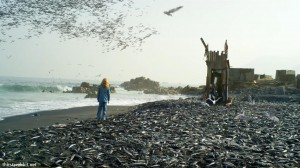 Here’s just one example of the many metaphor-laden scenes we get to see – after a stone that little Alejandro throws in anger at the sea unexpectedly results in thousands of fish getting stranded and perishing on shore, seagulls appear from nowhere to feast upon the sudden glut, and Jodorowsky muses, “I felt confused: should I suffer the anguish of the sardines, or should I delight in the joy of the seagulls…”. Jodorowsky’s mother Sara (Chilean soprano Pamela Flores) sings in the film instead of talking – while the reason was because it was his mother’s long-held wish to become an opera singer, and he was merely trying to fulfil her ambition symbolically, it is even more moving if you interpret it as the mother’s voice in itself sounding as music to young Alejandro’s ears. 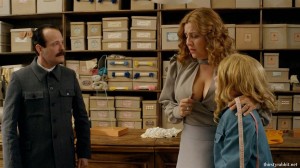 The film has a personal mission too. Jodorowsky, heavily involved in his psychomagic, in effect workshops his film project into an elaborate therapy session, with family, to come to terms with a difficult past. He’d mentioned (separately) that he was traumatised in childhood by an overbearing father who expected him to be as manly as he was, one who he opines was also a hypocrite in facing up to his own ideology. Through the film, Jodorowsky not only highlights his father’s flaws, but also enables him to redeem himself and regain his humanity towards the end, which of course, didn’t happen in reality. Children in town back then made fun of him because he was white, and circumcised. He was often harassed by people because he was a (relatively) rich Jewish boy, and effeminate looking with his long blond hair, which was nurtured by his mother to remind her of her own father. It’s because of these reasons that the film was also shot in the very place he lived – in a Tocopilla that’s barely changed over the years. But since his childhood home was destroyed by fire, he built one again to resemble the original home for this film. He also repainted all the run-down homes in the vicinity to recreate his childhood landscape, in order to put to rest his demons. The film set, and everything that went with it, was gifted back to the town after the shoot. 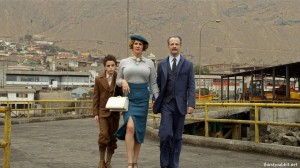 The film isn’t a straightforward work of fiction or even a strictly fictionalised biography – the thoughts in the film aren’t that of Jodorowsky as a child growing up in the 1930’s, but that of an octogenarian looking back at it using present intellect. And since everything is seen from a vastly different viewpoint, there is no point in poring over its historical accuracy, let alone delving into the narrative. Regardless, it is engaging and life-affirming in its own unique way. The performance from actors playing the mother-father duo and the son, particularly Brontis Jodorowsky, is brave and ‘real’ to say the least. Jodorowsky’s other son Adan handles the soundtrack and music with panache. The film was also the result of a reunion of sorts between Jodorowsky and his co-producer Michel Seydoux – they’d stayed apart after a doomed 70’s project (Dune, the one that never got made but nevertheless inspired sci-fi cinema the world over). However, it is an altogether personal film and should not be compared like-for-like to Jodorowsky’s earlier works, and certainly, Highly Recommended Viewing..!

The Nudity: Pamela Flores and Brontis Jodorowsky
Brontis Jodorowsky throws himself into his character headlong, and opera singer Pamela Flores – much respected and loved in her home country, doesn’t hold back either, which also reflects in the eye-raising frankness of their respective nude scenes. Wholesome Flores barely flinches while singing in the nude, and Brontis is as at ease with his naked self as he was, as a child in El Topo. There are at least four scenes featuring frontal nudity, male and female.

Pamela Flores and Brontis Jodorowsky in the autobiographical “La danza de la realidad”
aka “The Dance of Reality” (2013).