I’d been working backward through the filmography of Aleksey Fedorchenko, and was pleased to see that his Fellini-esque surreal comedy from 2007, “Zheleznaya doroga” [Eng. Title: The Railway] was as much an allegory as a visual feast. 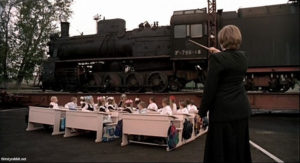 The hilarious premise posits a school headmaster hatching a rather unusual plot to make up for a shortfall in the school’s funding – by smuggling out coal from abandoned mines in the town’s vicinity, on a disused railway line that was heading south into the vast Russian Steppes. Thanks to a mistaken belief that coal was in high demand in that region, he sets about laying his plans in secret so that others wouldn’t catch wind. 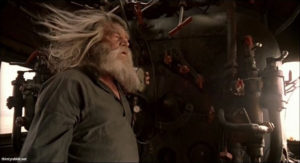 He persuades a pal (Sergey Belyaev) with his kid Mishka (Daniil Shavkunov) to join the endeavour, and after dusting off a beast of a Soviet-era locomotive languishing in a museum, they enlist the services of an equally ancient driver (Pyotr Zaychenko) who’d apparently gone feral in the rusty overgrown railway yard. As the film progresses, the driver and his relationship with the locomotive become an important part of the narrative. 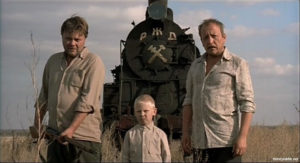 After stocking the lone wagon in the train with sacks of coal collected by the school children, the foursome set-off on a surreal journey passing through disappeared stations, abandoned towns and meet some extraordinary characters along the way, including the remnants of a circus troupe that had gone missing in the Steppes many years ago.

By the time they reach their destination, they’d used up and bartered away the coal that they were transporting for largely worthless bric-a-brac, exchanged by desperate locals still surviving in middle-of-nowhere towns. Perhaps they were waiting for the trains to return, or perhaps they’d given up all hope of making it elsewhere. Much of the narrative is from the viewpoint of Mishka who observes goings on armed with a creative license. 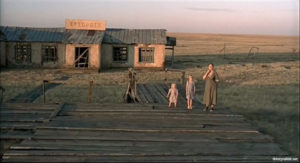 We meet giants, acrobats, and man-eating school children, and Luisa (Olga Degtyaryova), a sex-hungry redhead who boards the train after the headmaster proposes to her with a ring exchanged for coal by an old woman without fingers. Mishka listens to his father give varying accounts of his mother’s (Elena Veshkurtseva) gruesome/heroic death, and imagines each time saving her in a miraculous manner. Their journey, it turns out, is in fact a yearning for love… 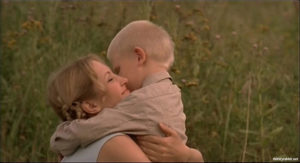 Almost every aspect of the characterisation can be seen in an allegorical or literal sense, depending on your frame of mind. But they’re equally absurd, delightful, and moving either way, thanks to Fedorchenko’s genius and sense of humour. Steeped in irony and loaded with dry wit, the film is a prime example of Russian cinema at its creative best. Needless to say, this little gem is Highly Recommended Viewing..!

The Nudity: Olga Degtyaryova, Elena Veshkurtseva, and others
Olga Degtyaryova, as the redhead, appears nude in a couple of scenes, and there is brief nudity from other actors during the rest of the film.