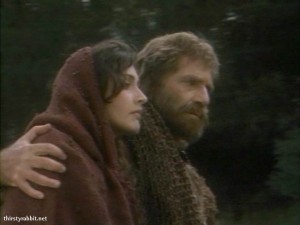 Occasionally we bump into a film only when looking for something else. An exploration into early post-Soviet Russian cinema led me to Vladimir Alenikov’s medieval drama “Time of Darkness” [Russian Title: Fiofaniya, risuyushchaya smert], made originally in English. Produced by an American company, and even starring George Segal, it was also a general indicator of the US-Russia bonhomie at the time. 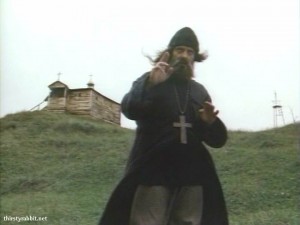 The low-budgeted film is set in eleventh century Russia, a period when many rural communities still practised their old pagan faiths, and newly arrived Christian missionaries were trying to convert them (which they achieved, but pagan ideas such as witchcraft and babkas (spiritual healers) are still fairly popular today). A spate of crimes erupt in a remote village after a summer festival, and young women newly converted to Christianity begin to get killed. While village chief Grigory (George Segal) attributes these attacks to a werewolf living in the woods, Fiofaniya (Tamara Tana), the healer-woman, after examining their bodies, believes that they were raped and killed by someone in the village. 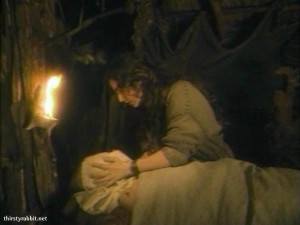 Fiofaniya also has the ability to have ‘visions’. It will help her piece together events leading up to the murder, but she wont be able identify the killer itself because he’d donned a carnival mask, like many other men in the village, during each attack. The heady mix of superstition, myth, and religion will make any effort at solving the crimes impossible, until Fiofaniya stumbles across a clue that’ll lead her to the killer. She’ll soon face mortal danger herself; with villagers fearing that she might be a witch, and the killer inciting the crowd to lock her inside the house and set it ablaze, almost replicating the fate that befell her own mother at a different village… 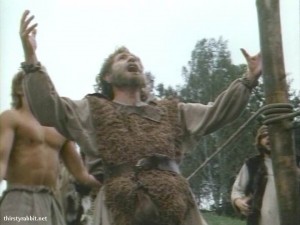 Its historical setting and the pagan-Christian conflict may be vaguely reminiscent of Andrei Rublev, but this is certainly not a Tarkovsky – and to its credit, it doesn’t even pretend to be one. This is just a good ole American B-movie, more accurately, a Russian attempt at making one, that has every right to share the same shelf as the Conan epics in your friendly neighbourhood VHS library. The director has later gone on to do more memorable work, but this film is all comic strip-style material with a dodgy screenplay, B-movie style. 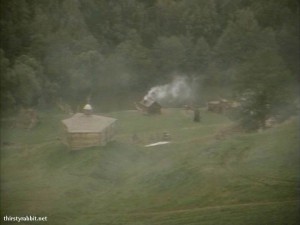 And yet, it couldn’t help itself trying to be artistic at times, in a minimalist sort of way. Given its budget, it has managed to recreate authentic-looking sets and especially the corpses, but I have reason to believe that they might have also killed or maimed a real wolf while making the film, possibly for added authenticity. Either that, or it must’ve been a surprisingly clever piece of filmmaking for its time. Nevertheless what kept me engaged, were the bevy of undeniably beautiful actresses appearing in the film, and often in various stages of undress. These may or may not be the right reason for watching the film, but the extra spice certainly enhances the exotic storyline and lends it historical legitimacy (although I’m not sure about the extent to which Slavic pagans practised witch-burning).

There is a much cheaper DVD available as well, but it is German dubbed. I also can’t attest to the DVD’s quality because mine is an older non-remastered NTSC edition, not available in Amazon at the time of posting.

The Nudity: Tatyana Novik, Tamara Tana, Mariya Korolyova, Zoya Simonova, & others
The film features nudity in a variety of public spaces; when people conduct medieval fertility rituals,  bathe in the lake, are pursued through woods, and also features a Lady Godiva-style stride through the village, sans the horse.