Dida Andrade and Andradina Azevedo script, direct, and star in their independent debut feature, “A Bruta Flor do Querer” [Eng. Title: The Savage Flower of Desire, aka Deep Blue Dream] about life and prospects for youth in a competitive and downbeat Sao Paulo. 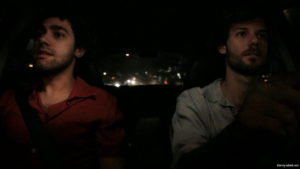 The free flowing non-narrative gives a brief backstory to Diego (Dida Andrade), a promising film school graduate whose self-confidence is shattered the moment he enters the job market, and who’s now reduced to shooting wedding videos for a living. He occasionally meets up with former students and drowns his sorrows in drugs and alcohol with his slightly better-off friend (Andradina Azevedo), who’s promised to recommend him to an uncle producing a school play. 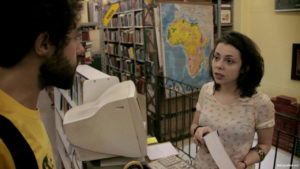 Diego tries to win over local belle Diana (Diana Motta) who works at a used books store, and a good chunk of screen time is dedicated to his desperate attempts to draw the courage and ask her out. The potential romance however unexpectedly fizzles out before it could take off, and leaves an already low Diego shattered.

After wallowing in his misery under a state of drug-fuelled stupor, Diego, in a moment of frenzy, walks out on his day job. Not making headway with the kids playing in the drama project, he and his friend decide to escape the city, its trappings, the failures and the loneliness, and head to the coast in search of chicks and new friends… 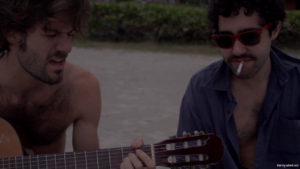 Separated into chapters in a Godardesque fashion, the film draws obvious pointers from the French New Wave even if a bit superficially. I was disappointed that the promising skyline of Sao Paulo doesn’t get to play a greater role in the film, but to their credit, the directors do manage to challenge the audience into listening to their story, replete with warts and pimples, and without the feel-good factor of the boy getting his girl. For those who can look past the excessive use of drugs in the film (not nearly in an engaging, Trainspotting kinda way), it would be Recommended Viewing..!

The Nudity: Clara Andrezzo, Dida Andrade, Nara Lobo, Andradina Azevedo, Danielle Rosa, and Sue Nhamandu
Sex scenes inside a car feature twice in the film, and one of them is briefly explicit when the girl that Diego had picked up strokes his penis. The film also features a skinny-dipping scene and one where Diego hallucinates a girl (Nara Lobo) taunting him in German.

Danielle Rosa, Nara Lobo, Sue Nhamandu, and others from the Brazilian film,
“A Bruta Flor do Querer” (2013).