Péter Bacsó’s comedy drama “Te rongyos élet” [Eng. Title: Oh, Bloody Life!] casts a critical eye on the exploitation-in-kind, of aristocrats and the rich elite in Stalinist Hungary during the early fifties – many of them were forcibly evicted from properties and sent off to work in farms and factories, as labourers. 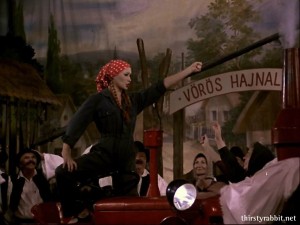 Lucy (Dorottya Udvaros), recently divorced from her aristocrat-husband, makes a living in Budapest as a stage actress. Authorities come calling, to tell her that she had been ordered to live and work in a farming village henceforth as part of her ‘re-education’ and re-induction into society. Despite professing her working class upbringing, and attempts to explain her marital status, they give her one hour to pack her essentials and arrive at the train station. 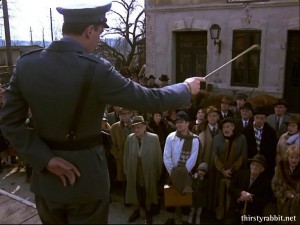 Upon reaching their destination, Lucy and other former aristocrats deported along with her, are assigned various roles by local police captain Matura (Zoltán Bezerédy). They’ll live among peasants, and earn their wages through manual labour. Even though she misses the stage, and home comforts that she’d grown accustomed to, Lucy soldiers along with grace and humility. 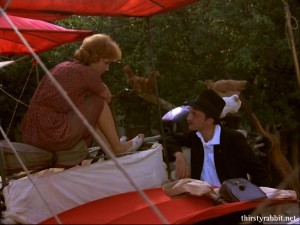 Her inherent charm and winning ways will draw the attentions of József (László Szacsvay) – local teacher and party secretary, and Matura himself, which she’ll deftly manage to help make her stay slightly more bearable. After noticing her talents, József begs her to participate in a local production aimed at bringing art to the proletariat, which she accepts. They get close and he even proposes marriage. 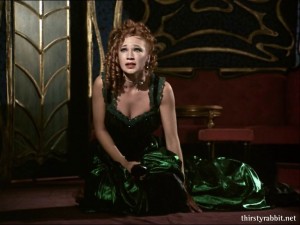 But after a freak accident, Lucy is taken to Matura’s mansion, ostensibly for questioning, during which he attempts to rape her. It is thwarted when government agents barge into the room, only to arrest and take her away. Lucy’s worst fears are finally allayed when she’s asked to put on some make-up, and start exercising her vocal scales – after all, she’s about to perform for the first time before a VIP-audience, even if that meant having to work with former colleagues who barely offered solidarity during her hour of need… 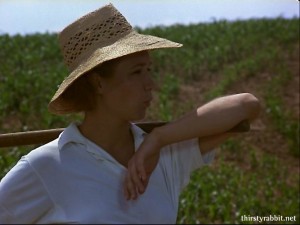 In many ways, this is typical ‘mainstream’ fare emanating from a ‘liberal’ corner of the Eastern Block – the leash that tied Hungary to Soviet ideals grew longer with every passing year following the 1956 crackdown, and this film was made only a few years before the iron curtain was finally torn open. It has a simple plot, carrying a social message that doesn’t ruffle too many feathers. It has comedy, drama, song, and dance – and nothing nearly as subversive or dark as what the Czechs used to come up with. But it is also exceptionally well performed, particularly by the gorgeous main actress Dorottya Udvaros, who reminds you of 60’s Hollywood siren Stella Stevens in her prime, or a redhead version of her if you like. Besides, Ms. Udvaros also sings in her own voice, even while in the nude. At least for her stunning presence, and the comedy, the film is Highly Recommended Viewing..!

The Nudity: Dorottya Udvaros and Zoltán Bezerédy
Of the three scenes that feature nudity, the third is the longest and most memorable, when both the actors perform without any inhibition. It is also quite funny – after picking up Lucy from a police cell where she’d been locked up for overstaying in the city, Capt. Matura brings her to his mansion, and invites her to use his luxurious bath. He had once wanted to be an opera singer, and enthused after watching Lucy sing in the bath, opens up to his secret passion. But when he readies himself to jump in bed with her afterwards, she springs a surprise on him. The first nude scene happens when authorities come knocking on her door when Lucy is ‘practising lines’ with her director, the second is when Lucy catches Matura ogling her from the village’s church tower.