Tom Roberts made his feature film début with the post-war romantic drama “In Tranzit”, a UK-Russian co-production starring an international cast that included recognisable names such as John Malkovich, Thomas Kretschmann, and Vera Farmiga. The story is apparently based on true events that happened during the winter of 1946. 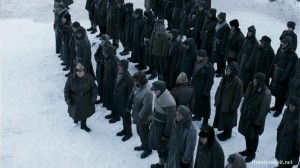 A rag-tag group of German prisoners of war are brought to a Soviet transit camp in Leningrad run by female guards, many of whom have incidentally had their family members slaughtered earlier by the Nazi army. The women understandably display some hostility towards their prisoners. 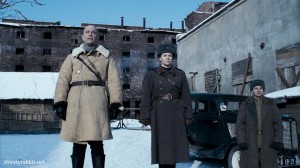 Apart from resident doctor Natalia (Vera Farmiga) and the young cook Zina (Natalie Press), who see them as human beings. But Colonel Pavlov (John Malkovich), overseeing the operation, had also entrusted Natalia with the task of identifying SS guards mingling with assumed names among regular soldiers, in order to prosecute them for their war crimes. In return for her cooperation, Natalia is allowed to keep and look after her shell-shocked and disoriented soldier-husband Andrei (Evgeniy Mironov), rather than sending him off to a ‘correction facility’. 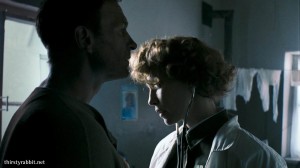 Among the prisoners are Max (Thomas Kretschmann), and his former student Klaus (Daniel Brühl), and it is Max that Natalia particularly warms up to – a fact that also doesn’t go unnoticed by Klaus. He persuades Max to take advantage of her fondness and also tries to convince him to disclose some SS men within the group to her, so that they could have a much more easier time there, but Max doesn’t agree to the scheme. 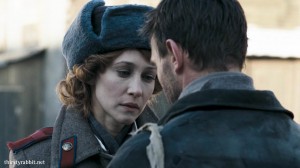 A tentative but doomed romance blossoms between Max and Natalia, and they end up having a one-night stand after a ball held for prisoners and local women. They’ll soon need to separate, after an amnesty and repatriation of prisoners of war is agreed between Soviet Union and the Allies. 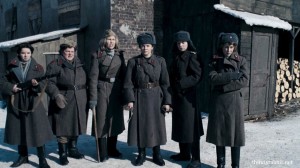 The film, shot with a documentary-eye, aims to cast a compassionate glimpse into the healing process between enemies after a devastating war. The beautiful cinematography is reminiscent of watching an István Szabó film, and performances by all the main cast are flawless. What it suffers from though, and part of the reason for the film’s relative obscurity, is the indifferent screenplay (and script) – the actors are expected to accomplish a lot with minimal material, and it shows in the way it is edited. Some goings on are not explained properly, for e.g., why would a group of women come chasing prisoners after a few dances at the ball – are they so easy that they could ignore the atrocities committed by them during the war, that also led to their husbands and sons getting killed? The film may have its virtues, but unfortunately fails to capitalise on them – it could have been infinitely better.

The Nudity: Vera Farmiga and Natalie Press
In a scene, Natalie Press, as Zina, is humiliated by Pavlov, when he forces her to strip in front of everyone, upon overhearing her joking with one of the prisoners. The other instance is during a moving sex scene between characters played by Vera Farmiga and Thomas Kretschmann.