In his third feature, noted Hungarian director Miklós Jancsó presents a war-themed drama in the film “Így jöttem” [Eng. Title: My Way Home]. Considered by many as a masterpiece, it is a detached observation made with great detail but very little commentary, and focuses, as the title suggests, on a young soldier’s return home. 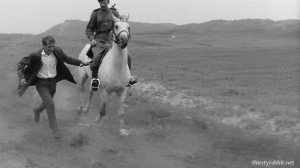 Set somewhere in Soviet Union during the final days of the Second World War, the film begins with an unarmed seventeen year old soldier, Hungarian Jóska (András Kozák), getting separated from his friends while fleeing a Cossack unit on horseback. Since Hungary had sided with Nazi Germany, he’s duly taken prisoner. However, he is soon released over a technicality and allowed to continue on his journey. 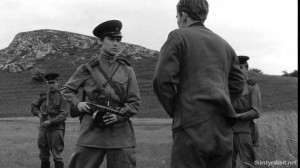 But Jóska gets captured again, this time by a Russian regiment after he’s caught sleeping covered in an abandoned Nazi jacket. Owing to the fact that he’s still a schoolboy, they send him to help tend a dairy farm run by a Kolja (Sergey Nikonenko), a young Russian soldier. Kolja had been given this relatively lighter duty owing to an injury, with a bullet still lodged inside his body. 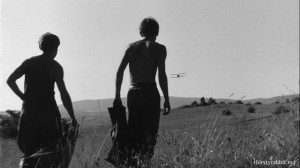 On one occasion, Kolja saves Jóska from being blown up by a landmine after he attempts to escape custody, and later Jóska too reciprocates by refusing an offer to join fleeing Hungarian prisoners, telling them that it would get Kolja ‘into trouble’. Despite neither of them understanding the other’s language, an unlikely friendship develops between the two. Away from the sounds of war and in the barren landscape, Jóska and Kolja bond and begin to behave as teenagers do during normal times. 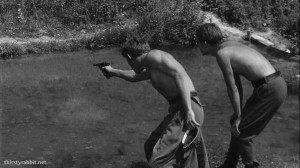 We observe their everyday chores and pranks; milking cows, target-practising on frogs in a canal, loading cans of milk onto trucks, chasing after naked women bathing, and fooling around with statues in a ruined museum. Yet just when we’d momentarily forgotten that there was indeed a war happening, a fighter plane ominously passes by, sometimes low over the lads’ heads who had stopped to watch. The reality of war will also separate the two, and Jóska sets out on his journey home once again… 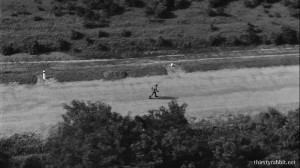 One of the stars of the film has to be the breathtaking cinematography – orchestrated in what will become the director’s signature style. The well-choreographed aerial and panned shots firmly pin characters to their immediate surroundings to remind us of a ‘bigger picture’ whilst deliberately disallowing us the ability to read thoughts and motives. In some scenes, characters are either followed from behind or silhouetted altogether; we observe their actions, but rarely their state of mind. Apart from the film’s title, the only time Jancsó affords us any emotional contact with his characters is in the closing shot of the film, where he pans to a bruised and exasperated Jóska looking into the camera with an air of defiance, as if to raise a plea.

The idea of a ‘natural’ friendship between a Hungarian and a Russian, with the short but brutal 1956 revolution still fresh in many people’s memory would’ve certainly caused a stir at the time of release. But to his credit, Janscó dilutes any potential propaganda value by succinctly focusing on the social dislocation and humanitarian implications of war. Consequently, we get to see a rather simple film without too many loaded metaphors, made with admirable skill and technical sophistication, and yet holding a charm that can relate to audiences even today. Highly Recommended viewing..!

The Nudity:
There’s just a single scene that features nudity – when the boys chase down girls bathing in a canal. But it is also one of the most beautifully crafted sequences in the film, where we see the ‘hunters’ themselves being ‘hunted’ by a plane swooping threateningly low over their heads – as if to deliver some kind of poetic albeit harmless justice. The scene is amusing as it is dramatic, memorable, and calling for all to see and appreciate.