Maren Ade’s oddball comedy “Toni Erdmann” is a uniquely German attempt at highlighting the need for reinforcing familial bonds even while pursuing hectic lifestyles and careers. The film wryly focuses on a father-daughter relationship weathering changes in their individual circumstances. 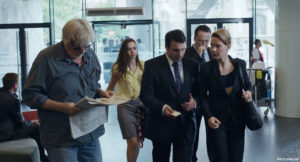 Ines (Sandra Hüller) is a high flying thirty-something corporate strategist whose work often takes her abroad on various assignments. Serious about her career, she allows little time for herself, let alone her parents in her hometown, which she occasionally ‘passes through’ only during important family events. Her eccentric father Winfried (Peter Simonischek), in the hope of reigniting their bond, springs a surprise by visiting Ines in Romania where she’s presently working. 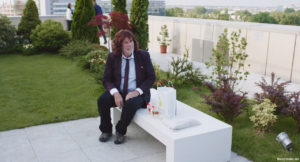 Ines puts him up in her apartment out of a sense of duty and drags him along to her official meetings and dinners, presumably to keep him company, but it doesn’t work out too well due to Winfried’s innate spontaneity and frankness. He leaves after an argument, but reenters her life soon enough in the form of ‘Toni Erdmann’, his even more forthright and practical-joking alter ego. 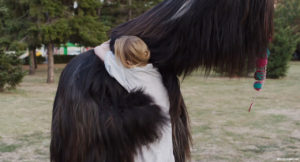 While Ines is no stranger to Winfried’s ridiculous wig and false teeth wearing ‘Toni’, she plays along since she doesn’t have to feel embarrassed while introducing him as her father. However, with each squabbling encounter that they have, Ines begins to loosen up, and the bond, frayed since she left home many years ago to pursue a career, gets stronger, first with ‘Toni’, and eventually also with Winfried… 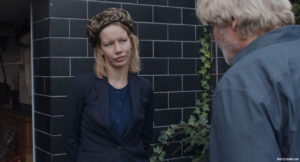 A father’s bond with his daughter is always special in normal relationships, but sometimes even they require a bit of work in a hectic world. Ms. Ade gets this point across in a delightful way that’s not only refreshing, but also heartwarming and full of festive spirit. For an unusually long German film, it is a breezy and charming little family drama that’s Highly Recommended Viewing..!

The Nudity: Sandra Hüller, Ingrid Bisu, and Thomas Loibl
In one of the absurd comedy sequences in the film, an impatient and socially awkward Ines, frustrated with the ill-fitting dress for her birthday house party, gets rid of it to answer the door, but soon gets annoyed with her American guest and tells her that it is supposed to be naked party – a ‘team bonding’ session among work colleagues, essentially forcing her to leave. Her colleague and occasional lover is turned away for the same reason – while she initially regrets her action, she also feels liberated. Her Romanian intern Anca (Ingrid Bisu) and boss Gerald (Thomas Loibl) upon instruction, duly oblige by entering the flat in the nude, and they’re briefly interrupted by Winfried dressed in a Bulgarian folk mask. Ines recognises her father through the mask and follows him when he leaves.