Dorothée Van Den Berghe’s début feature “Meisje” [Eng. Title: Girl] is about a young provincial woman who is determined to escape her mundane working-class existence, experience what it’s like to be ‘independent’, and get herself associated with refined culture in a big city. The film also looks at issues concerning women of various ages using characters that the protagonist interacts with. 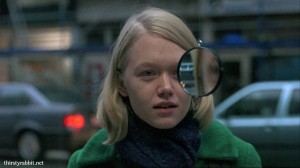 It begins with twenty year old Muriel (Charlotte Vanden Eynde) attending an interview for the post of museum guide in a Brussels art gallery. Even before waiting for her result, she gives notice to her employer back in the village, where her doting mother Martha (Frieda Pittoors) too works, and rents a room in a Brussels flat owned by Laura (Els Dottermans) – a thirty-something woman desperate to get pregnant. 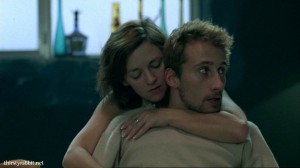 Laura is an exuberant woman who thinks she has little time to waste on niceties such as love and loyalty. When her lover Oskar (Matthias Schoenaerts) refuses to be party to her pregnancy-plans, she promptly starts scouting for a new lover. When her terminally ill mother (Alice Toen) enquires about him in the hospital, she lets her know that they’re no longer together. 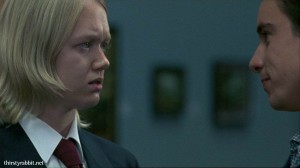 Muriel doesn’t land the expected job, but she persuades them to give her any other job in the gallery. After some initial reluctance, they make her a guard. Her erstwhile boyfriend Luc (Nico Sturm) is upset at her leaving village, and comes looking for her at work, in vain hope of convincing her to return with him. Instead, Muriel secretly begins fancying Oskar after bumping into him while returning from work one day. 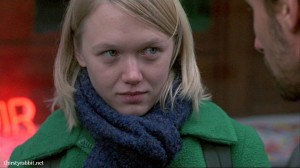 Their first date won’t turn out as planned, when Muriel is forced to babysit the children of Laura’s new lover Alain (Wim Opbrouck) – he had after all offered to sample Laura’s voice to kick-start her musical career. Sneaking out after putting the children to bed, Muriel, worried about them waking up, couldn’t quite enjoy her date and returns home in haste. The same evening, Martha, clearly not happy about her daughter living away, comes looking for her in Brussels. Martha, Laura, and Muriel will unite under unexpected circumstances, and also open up to each other… 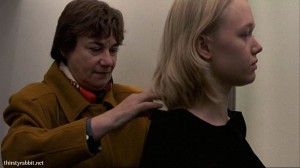 Van Den Berghe’s début, whilst showcasing her talents as film-maker, also demonstrates her willingness to draw inspiration from other world directors such as Robert Bresson and Mike Leigh. But the film also delves headlong into self-reflective realism of the Nouvelle Vague kind, and perhaps could’ve lightened up a touch now and again. Of course, this isn’t helped by the protagonist’s rather reserved, Cinderella-type character whose forte doesn’t include humour. What’s insightful and well observed however, are the mother-daughter interactions – both between Muriel and Martha, and Laura and her mother, that are as moving as they’re relevant in understanding modern family relationships. At least for this reason, it is Highly Recommended Viewing..!

The Nudity: Charlotte Vanden Eynde, Els Dottermans, and Alice Toen
The film contains a number of scenes featuring nudity and sex, some of which are also close-ups that might even have used a body-double for actress and performance artist Charlotte Vanden Eynde, who isn’t particularly the shy type. Most of the nudity however is from Els Dottermans, and she also features in a hilarious, interrupted sex scene. Alice Toen is shown nude while undergoing a scan at the hospital.