Agustín Díaz Yanes has the distinction of having directed one of the most expensive films ever made in Spain, “Alatriste”. Based on a series of popular novels about the exploits of a seventeenth century soldier and mercenary – El Capitán Alatriste, it is a swashbuckling epic spanning some four decades of one of the most eventful periods in Spanish history, one that also saw its world superpower status seriously challenged by upstarts like England and France.

Storyline:
I haven’t read any of the original novels, so my storyline is based purely on what one sees in the film. Almost episodic, the film starts with Alatriste as a soldier under King Philip IV involved in quelling a revolt in the restive Flanders (Dutch) region. When one of his comrades dies during battle, Alatriste promises to take care of his young son Íñigo. Alatriste soon becomes prominent enough to get noticed in royal circles, and is commissioned odd and sometimes unofficial assignments to do their dirty work. Romance is part of the film’s offering too – between Íñigo and the Queen’s lady in waiting Angélica, and Alatriste’s own affair with actress María de Castro, upon whom the King himself had set his eyes on. María de Castro is probably the most tragic character in the film as she will spend her last days at a syphilis hospital, and Angélica will also change her mind about eloping with Iñigo after realising she has the opportunity to become a countess – practical lady. There are several more battles and intrigues than I’d care to write about – let’s just say it is action packed from beginning till the end.

The film aims to appeal to an international audience by casting Scandinavian-American Viggo Mortensen (Lord of the Rings) in the titular role. It is also around two and a half hours long – not enough to fit in five novels and do justice to the original work, but that’s what it tries, and fails. People who’re not aware of the original stories will find the film an information overload. With regard to the production, I’m still not convinced about the film’s supposed technical merits save the exquisite costume design, and even that job is made easier by focusing on too few types of characters – soldiers, nobles, and slaves – I don’t remember seeing a single peasant or trader in the entire film. I’m afraid every other aspect is only trying to compare itself to production levels of Tirante el Blanco, a film that also came out the same year. I found the cinematography, set design, and lighting spending too much effort trying to look like a sombre Velázquez or early Goya composition instead of making us feel and breathe the late medieval air. Apart from the boat scene with the slave rowers, there’s little else that impressed me in cinematic terms.

May be my opinion is clouded after watching recent ground-breaking productions like The Game of Thrones, may be because I’m not generally a sucker for historical epics unless it is researched and seen through the eyes of a Pasolini, or may be I’m just plain annoyed that having watched too many things happen on-screen, precious little has indeed registered. This film has failed to impress me. Among the performances, the best is that of Ariadna Gil who plays the actress María de Castro caught between the affections of Alatriste and the King. Elena Anaya also is a joy to watch even if there’s nothing too challenging for her to do here. This post is more of an excuse to write about a brief minute-long nude scene shot with all the coyness of late imperial catholic Spain – that of Angélica being persuaded by Íñigo to elope with him and get married. Angélica is played by an angelic Elena Anaya. 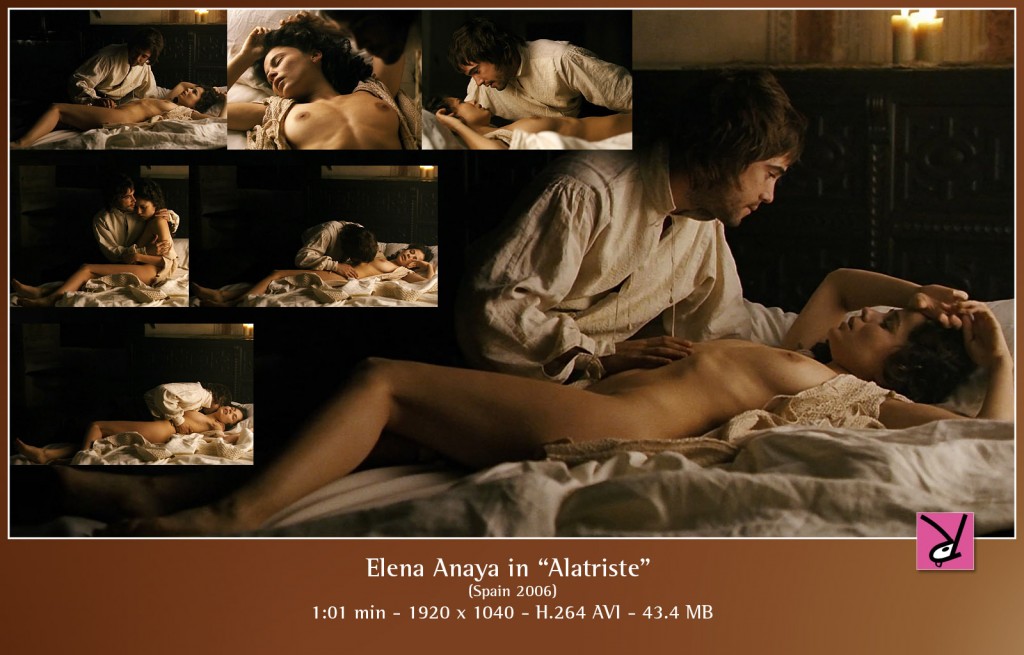 Elena Anaya plays the royal staff member Angélica who is persuaded by young lover Íñigo to elope with him in the big budget Spanish swashbuckler "Alatriste"..