Veteran Catalan director Vicente Aranda’s passionate melodrama, “La Pasión Turca” [Eng. Title: Turkish Passion] is probably not the best way to start the filmography of Ana Belén, one of Spain’s important singer-actresses, who was also one of the faces of her country’s ‘Destape’ transition years, when censorship was first relaxed. I fear Sra. Belén may have been terribly miscast in this film. I haven’t read the novel from which it was based, and judging solely by the script and screenplay – I presume the character played by Ana Belén must either be a dumb nymphomaniac or someone with an obsessive dependence on her lover. Against common sense, her character returns to an abusive and overbearing relationship with a lover who can do little else but take. The film also casts a clichéd and outdated view of Islamic society, with undertones that could be considered racist. But then again, this is a film from a different era, and what may be considered unacceptable now may have even been tolerated then.

Technically though, the film is masterfully put together, with some excellent camera work and editing, supported by some sumptuous locations and a fabulous soundtrack. There are some individual words of brilliance here and there (probably from the novel) but on the whole, the script appears to have been compiled in a hurry. The performances are also just about average – may be they didn’t have much to work with. The film had all the ingredients for a passionate Spanish drama – perhaps the chemistry wasn’t right. I’m a great fan of Sr. Aranda’s early films, many of which were quirky and daring, but this is definitely not one of his better works – his best in my opinion was made some ten years earlier (Fanny Pelopaja) which I’ll post in due course.

Storyline:
Newly wed Desideria and Romiro accompany other members of the family on a holiday to Istanbul – she’d been unhappy of late after being diagnosed ‘frigid’ by her gynaecologist. During their stay, she’s drawn to their tourist guide Yaman and instantly embarks on an affair – getting away briefly from family for their quick but passionate sex sessions. People have affairs for various reasons, and it is these variations that make them such a popular film-theme, but what Desideria is seeking through her affair is left unexplained. Upon returning to Spain, she discovers she’s pregnant (some diagnosis, huh!), just when husband Romiro is informed that he’s sterile. Obviously there’s no room to lie, and they decide to keep the child after she promises not to have relations with Yaman anymore.

But after the child dies (cot-death?) Desideria decides to leave her accommodating husband and head back to Turkey, only to discover Yaman’s not only married, but also no longer a tourist guide but a drug trafficker. Just as she’s getting used to the idea of having to be someone’s mistress for the rest of her life, comes a nasty surprise – Yaman now demands she ‘satisfy’ some of his ‘important’ clients too. She runs away humiliated, but returns – enthusiastically having sex with whoever Yaman asks. But after she realises that Yaman too has sex with other clients, she feels betrayed. I really don’t know what to make of this film having seen it thrice over the years, and each time while I tried to look for some subtle nuance I might have missed earlier, I didn’t find any! 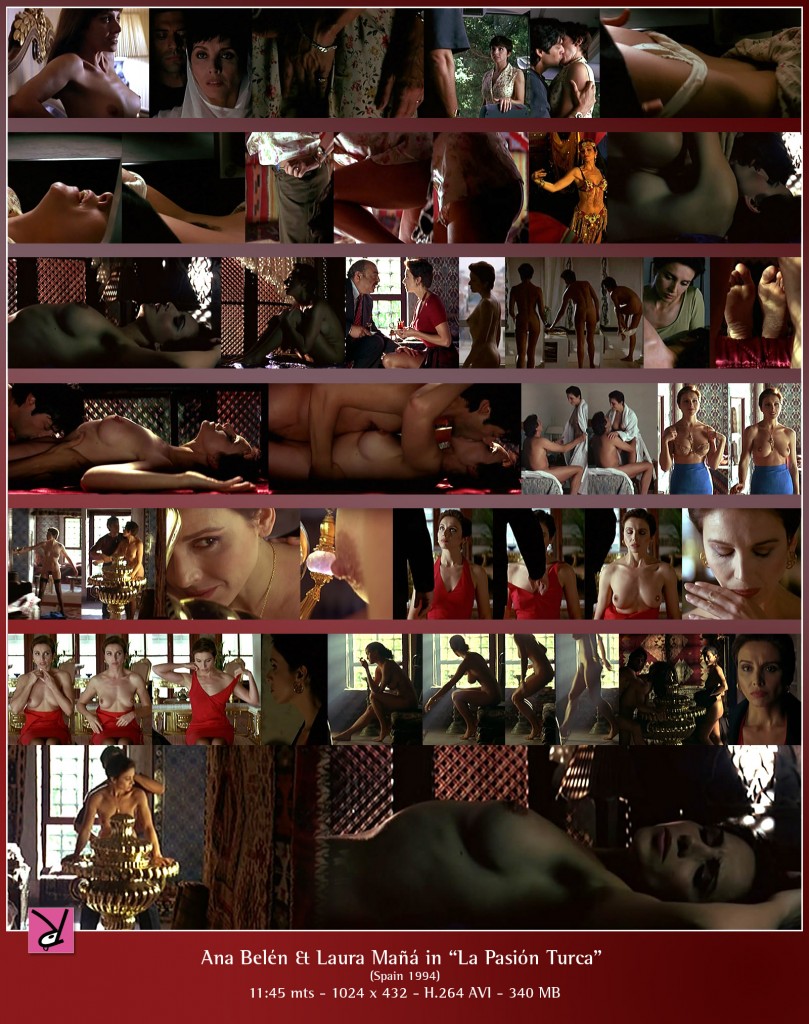 The film, “La Pasión Turca” includes several scenes of nudity by Ana Belén and also one by Laura Mañá.