María Teresa Suarez Maceiras wrote and made her directorial feature film debut (as Teresa Suarez) in the Mexican drama, “Así del Precipicio” [Eng. Title: At the Edge of the Abyss]. For a debut, it was certainly a bold film, considering it was addressing an audience a world apart from her film’s subject – one that’s probably better suited to a Madrid than a Mexico City. It concerns a tiny percentage of the upper class who make up the young and beautiful – the über-cool metrosexuals who have choices in life but don’t know what to do with them.

Storyline:
It’s about three young women, friends – the beautiful Lucía who works in advertising as an art director, a devil-may-care Carmen, an artist without commissions and who fancies a guy she can’t have because he’s gay, and Hanna, recently separated from her wealthy but mollycoddled husband. Together they share an apartment and we follow their fortunes as each one of them go through a crisis of sorts in trying to get to grips with their world. Lucía is hopelessly in love with two-timer Mathías, and vents her frustrations through drugs and alcohol which only lands her in further trouble. Carmen comes in possession of a stash of cocaine which will make her life more complicated than it already is. Hanna fares better than the rest – in fact her ‘crisis’ if anything relates to discovering her sexual orientation as she gets increasingly drawn towards a wealthy female customer at the jewellery store where she works. The other two, Lucía and Carmen, reach the edge of their own abyss, and the film explores how they deal with it.

When I watched this for the first time several years ago, I wasn’t particularly impressed as it pretty much resembled a mushy TV melodrama. Even now I feel the screenplay could have been better, and things were perhaps dumbed down to reach a hitherto new audience. But despite its defects, at least we’re saved a sermon – it is merely observing a people who at least in Mexico are rarely seen or heard. Some found the scenes of sex and liberal use of recreational drugs shocking, but I think there have been far more shocking films from Mexico itself, both in terms of sex scenes and drug abuse than this one. In fact one of the problems with this film is that it hasn’t delved into the issues deep enough to make us understand the protagonists’ plight fully, and possibly root for them. We’re never really shown the ‘precipice’, merely expected to imagine it by protagonists’ reactions.

This is nevertheless a sincere effort from Ms. Suarez as director – one can see she has some interesting ideas, and one hopes they’ll be better realised in forthcoming projects. She even coaxed two of the most beautiful and promising of actresses from Mexico to star in the film – Ana de la Reguera and the more sparingly used Martha Higareda. Ms. Reguera allegedly regrets working in the film, but I don’t really see any logical reason for it, unless there were creative differences or disputes of some kind. As for the acting, some give a pretty good account of themselves, notably Ms. Reguera who plays Lucía, and Gabriela Platas who plays Carmen. Technically however, I felt that the editing, direction, and the performances were always playing catch-up to overcome shortcomings of the screenplay, never always succeeding. But there are far worse films even from established directors than this one, and with an unforgettable scene that kick-starts the film, it is definitely worth the price of a ticket, or DVD. Recommended Viewing!

About the Lionsgate DVD:
While I dearly wish it was an anamorphic transfer – this is letterboxed-widescreen – it isn’t altogether as bad as in some other editions. This was in fact my second purchase, the previous one wasn’t any better, but at least this edition includes an interesting short film made earlier by Ms. Suarez called “Tú Mataste a Tarantino” [Eng. Trans: You Killed Tarantino]. And therefore a better value purchase.

Main Compilation: Ana de la Reguera
The DVD quality may only be average, but the opening scene in this film is anything but! That’s why I decided to enhance it as much as I could.
Here’s a snapshot from the original DVD (left), and my enhanced version (right): 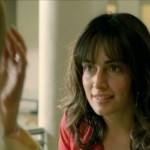 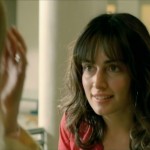