Juraj Jakubisko, like many of his contemporaries of the Czechoslovak New Wave, had an uncanny ability to weave elements of local myth, legend, and fantasy into a uniquely Slavic narrative that spoke directly to its audience. Often bordering on the absurd and the surreal, his films depict ordinary people coping with exceptional circumstances using little more than wit and humour. Creatively, his works are reminiscent of an early Vera Chytilová, only a bit more ‘colourful’ and audience-friendly. After initial success, he couldn’t be as productive as he wanted to be after the crushing of the Prague Spring, and had to rely on various well wishers to finish his projects. He has however managed to produce some remarkable gems that this site hopes to uncover for a different audience. 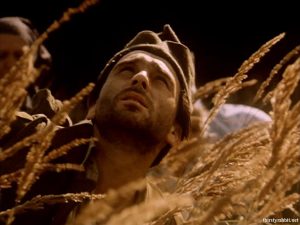 I start his filmography, not with one of his more famous works, but something more simple and accessible, but haunting nevertheless in the way it spins comedy against the backdrop of great tragedy and misery, “Sedím na konári a je mi dobre” [Eng. Title: I’m Sitting on a Branch and Feel Fine], with events unfolding as Europe’s fighting war finally came to an end during World War II. 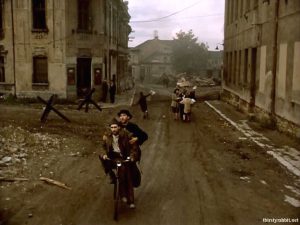 It begins at a refugee camp somewhere in Slovakia, where Prengel (Ondrej Pavelka), a young local soldier returning from war duties, and Pepe (Bolek Polívka), a likeable scoundrel and an out-of-work circus clown, bump into each other – Pepe is hungry and has a stolen bicycle to offer, and Prengel has some airdropped tins of pork at his disposal. They settle on exchanging food for a ride to wherever Prengel wanted to go, but are interrupted by a military policeman who recognises his missing bicycle with them. 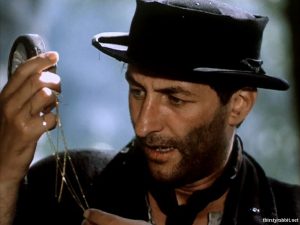 They escape into the woods along with the stolen bicycle, and only after one of their frequent arguments do they discover the reason why the gun-totting officer was determinedly pursuing them for what was essentially petty theft – the bike’s tubing was stuffed with jewels originally confiscated by the Nazis from fleeing Jewish families. While Prengel wanted them returned to the authorities, Pepe, with ambitions to set up his own circus company back in Italy, refuses and offers a share in the spoils instead. 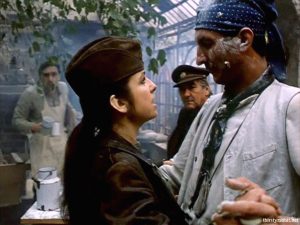 When Prengel discovers that his home has been destroyed and family members killed, Pepe consoles him and decides to stay. They take formal possession of a Jewish family’s abandoned bakery and mansion with the help of Prengel’s former school teacher, now an influential local official, and are suggested to become bakers in their own right so that supplies to the devastated town could resume. They manage to get by with their mediocre baking skills because the townspeople weren’t too fussed about the quality of their bread. 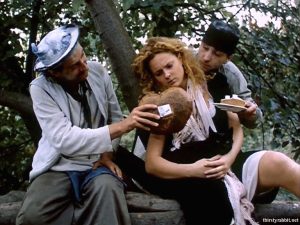 One day they notice a wandering young woman with a striking resemblance to Ester, the daughter of the Jewish family who owned the mansion. Both men fall in love and take her home. The girl (Markéta Hrubesová), apparently traumatised, rarely utters a word, and the men agree to behave like gentlemen and wait for her to choose one among them as her lover, despite the temptation arising every time she sheds her clothes to stay in the nude, which was often. Their love for her doesn’t diminish even after she returns to something akin to normal and admits that she wasn’t Ester after all, and that she only knew Ester as a schoolmate. Before long, they discover that she is also pregnant, and not because of them… 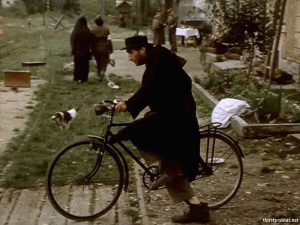 While the film draws its comedy using tragic events happening around the protagonists as a backdrop, it doesn’t trivialise the events themselves – instead it makes us feel for the fallen characters and, in the typical style of Emir Kusturica, keep them in picture as a constant reminder of the real world outside, and the urgent need to adapt and move on. It also, aided by some fine production design and cinematography, injects a level of authenticity rarely seen in films from Western Europe and Hollywood – it is about ‘real’ people who rebuilt a continent to the best of their abilities, from the ashes of war. The people are worth remembering, if only to delay the next cycle of history repeating itself. If there is anything allegorical in this film, it isn’t as apparent as in one of his earlier films with a similar topic, but even at face value, it stands out as great cinema and therefore, Highly Recommended Viewing..!

The Nudity: Markéta Hrubesová, Ondrej Pavelka, Bolek Polívka, and Deana Horváthová
Having watched the film years ago, the scenes I couldn’t forget were those of a pretty and wholesome Markéta Hrubesová, prowling the house in the nude with her pet black feline, and perched atop a tree while beckoning a randy and hapless Pepe. There is also a scene of Prengel and Pepe scrubbing themselves when Ester barges in to offer a helping hand. There is brief nudity from actress, producer, and director’s wife Deana Horváthová, who plays a relatively minor role in the film as an overenthusiastic communist ideologue – her character is initially pursued by Pepe, but the tables are turned upon conquest, after he realises that her sexual appetite is greater than what he could handle.