Renat Davletyarov has faithfully recreated a shortened version of a famous Soviet film by the same name “A zori zdes tikhie” [Eng. Title: The Dawns Here Are Quiet]. The World War II drama is an adaptation of a novel partly based on an actual military engagement in a remote corner of 1942 Soviet Union.

Some of the best World War II films focus on relatively unknown ‘minor skirmishes’ that happened on the sidelines of main events, often featuring unevenly matched opponents, and this film is one such classic example. It begins with an army commander ordering the transfer of a unit of soldiers manning an anti-aircraft gun in a remote part of the Soviet Union, following complaints of their increasingly frequent and disruptive drunken brawls over local women.

In their place, Vaskov (Pyotr Fyodorov), the Sergeant Major in-charge is resupplied with a group of young trainee female volunteers – they were chosen not only for their unlikely proclivity to either get drunk or fight over local women, but also because the remote area was considered relatively ‘safe’ since it hadn’t seen war so far. The bewildered and old-fashioned Major nevertheless accepts and builds new quarters for them keeping in mind their ‘feminine’ needs.

One of the new volunteers, returning after a secret rendezvous with her mother and son living in the area, witnesses and reports seeing two German soldiers in the woods. Rightly guessing the likely reason for them being here, Vaskov takes five of the girl soldiers to intercept them using a little known short-cut through marshland. Upon catching up with the intruders, Vaskov realises that there are not just two, but sixteen elite German paratroopers in that group, armed to the teeth with machine guns and explosives; certainly too many to handle with his limited resources.

He sends one of the girls back in order to alert the local headquarters, and decides to halt or delay the Germans’ progress until reinforcements arrived. But they don’t arrive, and Vaskov and the remaining four girls will stage a foolhardy but mightily heroic struggle to stop the highly trained and professional enemy. As they improvise and use unconventional tactics, Vaskov and his crew develop a bond that will strengthen their resolve to prevent the enemy from succeeding, at any cost…

Stanislav Rostotskiy’s original 1972 version of this film, at nearly twice its length, is epic not only in its scope where the traditional role of men protecting women is frequently reversed, but also in its gripping human drama – of dreams shattered and families destroyed due to the war, shown using the women’s individual flashbacks, and of the high value they attach to pride and honour. The rookie girl-soldiers display extraordinary courage in the face of insurmountable odds, and reflect a Russian mindset that goes beyond what might be construed as communist propaganda.

While the latest version respectfully follows the original, at times to the minutest detail such as casting and dialogue – after all the original had become part of local folklore not just in Russia but in former Soviet nations as well, it updates the same using modern cinema techniques and more experienced actors. The flashbacks and back-story are there in the new version too, but they’re relatively brief in order to fit the narrative within a shorter runtime. However, there are elements in the original that I wish were retained, like the grown up children of these women visiting the site of their mothers’ heroic struggle years later, as if to remind themselves of the price paid during the great patriotic war for their present (relative) liberty. My favourite will remain the original version, but for what it is, the latest version does a decent job of reinterpreting the original without reinventing the characters and storyline. While the original version is Highly Recommended Viewing, the latest interpretation should at least be Recommended Viewing..!

The nude scene in both versions is about a rare bath offered to the girls as reward for successfully shooting down a German reconnaissance plane. There is an additional brief scene under a waterfall in the 2015 version. The best thing about both the scenes is that they feature the film’s five main female protagonists in the nude instead of merely relying on extras to fill up the frame, as is often the case these days. 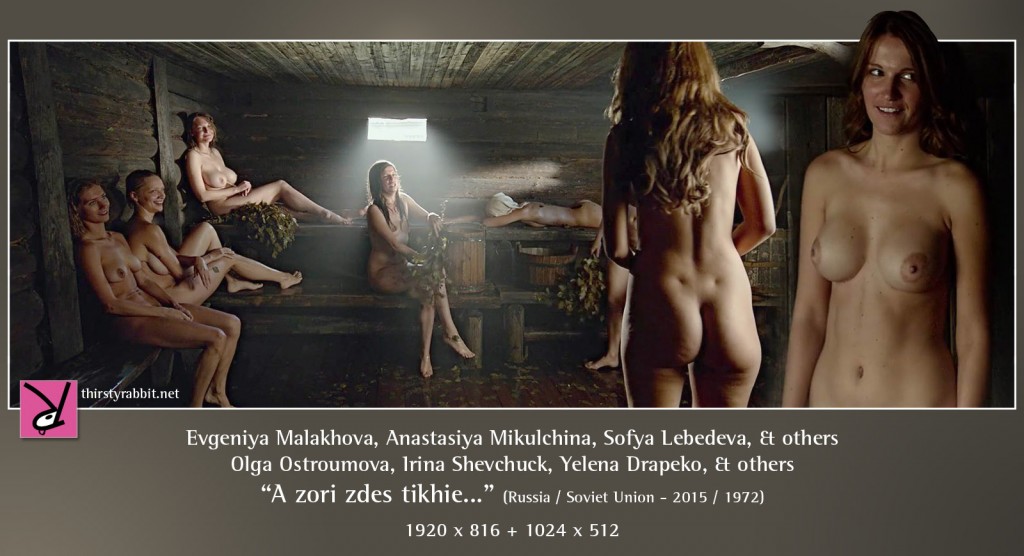 Evgeniya Malakhova, Anastasiya Mikulchina, Sofya Lebedeva, Agniya Kuznetsova, Kristina Asmus, Ekaterina Vilkova, and others from the Russian remake of a Soviet-era classic, “A zori zdes tikhie…”
aka “The Dawns Here Are Quiet”.