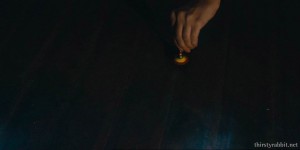 The title for Vasiliy Sigarev’s début feature “Volchok” [Eng. Title: Wolfy] refers to a spinning top, but it can also mean a wolf cub, and a way of describing a feral child. The depressing film is about the relationship between a mother not fit for purpose and her neglected daughter. 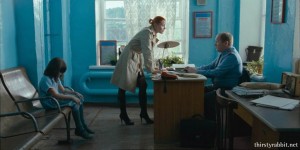 The film is told in flashback through a woman’s voice, narrating the relationship she had with her mother (Yana Troyanova) from the age of seven (Polina Pluchek) – the time when she first met her, arriving with her arms around a drunk ‘uncle’. The girl knocks the man down with a jar of milk the following morning after he starts a fight with her mum. The mother was arrested when she was pregnant (for killing a love rival), and is presumed to have served a sentence before getting to meet her daughter for the first time, but she has no maternal feelings for her even if the girl instantly starts pining for her affection. 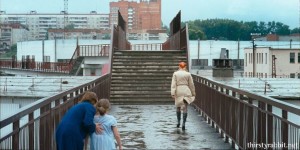 Many more ‘uncles’ turn up and leave, and the mother also often disappears for days, leaving the little girl looking through the window and yearning for her return. During one of her fleeting returns, the mother brings her a spinning top as present, which she’ll cherish. The only person who cares for the girl is her grandma, and she keeps encouraging her to make up with her mum, even if it was the girl who’s repeatedly put down and stamped upon by a woman who believes she’s too young to be mother and deserves to have more fun than she could manage. 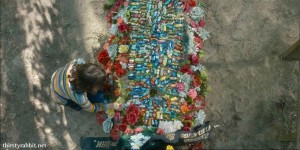 One of their frequent painful-to-watch parleys takes an evil turn when the mother tells the child that she didn’t give birth to her, instead, she was picked up as a wolf cub, wrapped inside a bag that was left abandoned in woods near the cemetery (and apparently she plucked out the fur to make her look more human). From then on, the girl starts frequenting the cemetery, believing that is where she belonged, and starts having conversations with surrounding graves. She even develops puppy love for a boy buried there, for whom she will sing, dance, and decorate his grave with candy bars, leaves, and flowers. 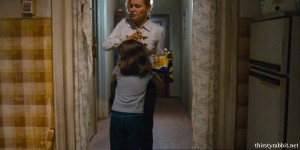 When the grandmother dies, what little semblance of family there was, disappears. The mother runs away after abandoning the child at a railway station, and even the police would be unable to track her down. They give the girl to her disabled aunt, where she’ll grow to become a shy and withdrawn teenager, but at least attending school which she didn’t manage earlier. One day, a bedraggled and wasted mother walks back into their lives… 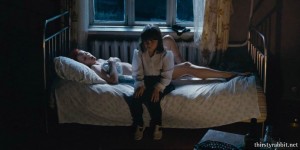 Beautifully filmed, it is visually as sumptuous as watching a Tarkovsky – of course, without nearly trying to be as poetic. The production design and formal compositions focus on visual details that may or may not have been necessary to propel the film, but it is very pretty to look at. They stand in stark contrast to the bleak coldness of proceedings – emotionless rather than heartless, of a selfish mother who finds her daughter a bore, whose presence a burden, and whose hugs a nuisance. We however see an attempt at presenting the mother-daughter relationship – impressively performed by Yana Troyanova and Polina Pluchek – as an allegory for an ‘uncaring’ present day Russia, just as the surreal ‘relationship’ that the girl has with a dead boy can be seen as a critique of some modern day relationships. Thoroughly depressing stuff, and I wouldn’t seriously recommend this film to everyone – it’s perhaps only for those who have a bit of a masochistic streak in them (like me).

The Nudity: Yana Troyanova
There’s a lengthy scene when Yana Troyanova’s character, lying naked in bed after she’d been sleeping with a woman she’d newly brought home, is decidedly being mean towards the little girl – telling her daughter that she was born a wolf. In a later scene, she pushes the child away for unbuttoning her shirt and begging for a hug.

Some scenes of Yana Troyanova from the Russian film “Volchok” aka “Wolfy” [2009].