Giuseppe Tornatore made his directorial debut with the crime drama “Il Camorrista” [Eng. Title: The Professor]. This would be our first glimpse of Tornatore’s prodigious talent, which will blossom gloriously in his next project two years later – a film that I still consider possibly the greatest ever made. In case you’re wondering, that is “Nuovo Cinema Paradiso” – if you love cinema and enjoy a hearty laugh and a cry in front of a screen, you must watch it. While I sometimes wish Tornatore had made a few more films, a part of me is glad to see him build his creative appetite by taking big time-off between projects – the result – every film of his is worthy of mention in the cinematic hall of fame. On another matter, if I ever venture south of Rome, it’ll be thanks largely to watching his films.

Back to the debut, Tornatore scripted the screenplay loosely based on a biopic of a real-life Camorra leader – Camorra being the Neapolitan equivalent of the Sicilian Mafia. It charts the rise and fall of ‘Il Professore’, from a childhood of extreme poverty to the leader of the ‘Reformed’ Camorra, and moving among the rich and powerful including the American Cosa Nostra, even while a wanted fugitive. It is a gritty, very well-made crime drama that portrays life and politics as it was when these syndicates cast their long shadow over the lives of every southern Italian against a hopelessly inert State apparatus. Shot in the style of a docu-drama, Tornatore adds an air of urgency to happenings with tactical use of rough edits, giving a journalistic feel to it, and the film is ably aided by the soundtrack – elements that I think were necessary considering the fact that the voice of Ben Gazarra (who plays ‘Il professore’) was dubbed, and he certainly ain’t no Al Pacino. It is nevertheless a fine film, and definitely Recommended Viewing.

The Nudity: Gilla Novak and others
The film’s brief scenes of nudity occurs courtesy of ‘Pelle-di-pesca’ (Peachy skin), an aide to the Cosa Nostra representative in Milan. She befriends and seduces Ciro, a close associate of ‘Il Professore’, whom he betrays. As retribution, both Ciro and Pelle-di-pesca will meet a terrible end in the hands of Il professore’s sister Rosaria, played by the Spanish actress Laura del Sol. ‘Pelle-di-pesca’ however, is played by a bold-as-ever Gilla Novak. 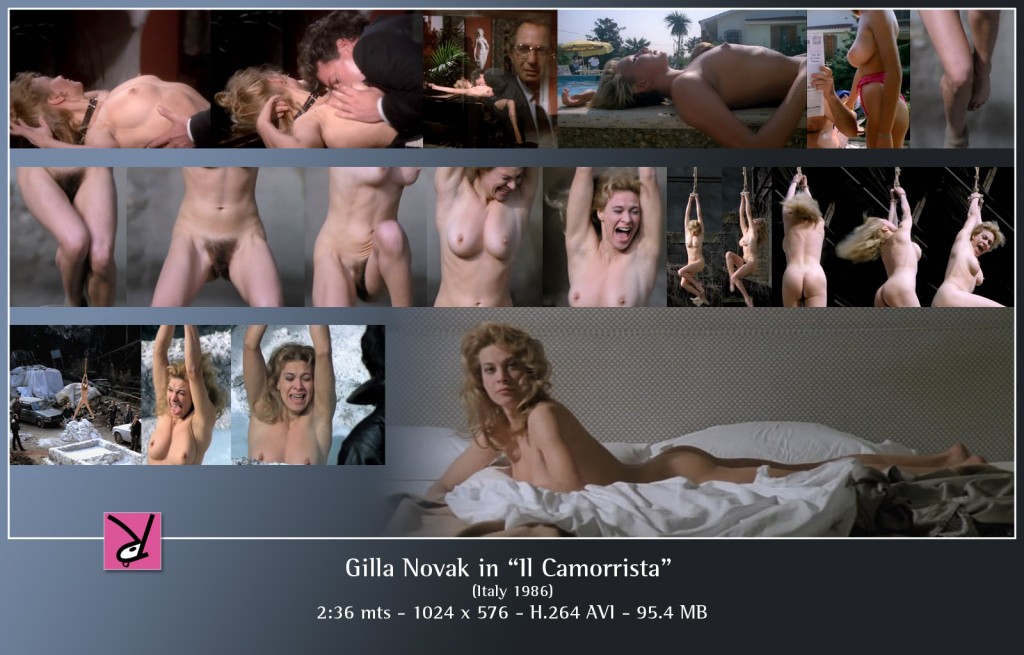 It required the likes of Gilla Novak to accommodate the brief but rather bold scenes of public nudity in Giuseppe Tornatore’s crime drama, “Il Camorrista”.