Okay – now for something completely different!

Sebastiano Montresor’s latest film “K Smette di Fumare” [Eng. Title: ‘K’ Quits Smoking] is a tongue-in-cheek thriller complete with outlandish plot and wacky characters. It is also part of a duology whose next instalment will be out in the not too distant future.

Storyline:
‘K’, a former comic-book hero, finds himself unable to cope after having been dumped by the only love in his life, Eszter, possibly owing to his cigarette breath, enthusiastic smoker that he is. However, some unresolved issues will make their destinies cross paths again. Eszter comes into possession of a ‘special’ cigarette pack coveted for some reason by a Russian agent who wants to become the new Czar (ok – stay with me on this one, guys). She also tries to force ‘K’ into giving up smoking so that they could get back together again. Eszter recommends a particular Anti-smoking clinic, to which ‘K’ also signs up, but he realises that they use a rather unconventional tool for his therapy – an android slave that will do anything for you provided your nicotine level cannot be detected by its sensors. Called the ‘Account’, it is to stick by her client 24/7 and telecast feed live to the centre. Meanwhile… Eszter gets kidnapped by a psychopathic surgeon who goes on to perform a disgusting ‘Human Centipede’ like procedure on her. The hero will now have to do something more apart from merely taking revenge on the dastardly surgeon – he needs to find her a new set of intestines…

This is Montrasore’s tribute to film-noire, Italian gialli and the horror genre all rolled into one, using his very own Agrestic, de-constructed style. The style isn’t very dissimilar to Fassbinder’s in The Merchant of Four Seasons, but of course this isn’t anywhere near as deep as the example. The film also features some grotesque scenes which were never intended to be taken seriously, and hence never made to look too convincing. The film is provocative regardless, not by being particularly profound, but more in jest. For me, this is by far Montresor’s best work, and I’m also beginning to enjoy his unconventional but altogether refreshing style of film-making. Cinema needs jesters like him to poke fun and remind us that nothing can ever be taken too seriously. He also appears to have a talented crew who are on his same wavelength – the cinematography and editing are actually pretty good, and you can easily tell that they are quite capable of producing glossy mainstream stuff if demanded. The sound engineering by Airbag Killex is actually quite impressive, with some groovy tracks also thrown in. I thoroughly enjoyed watching this film – it is Recommended Viewing..!

DVD:
The film isn’t actually out yet – mine is a copy sent directly by Montresor himself, but will update this once it is made available.

Compilation: Emanuela Trovato and others
The director had requested to make these clips widely accessible for people to sample, the very reason for my making this post public.

Main Compilation: Emanuela Trovato, Stella Novari, Emanuela Petroni, Annalisa Lori, Carla Meccariello, and Diana Simona Gasparini
Some of the scenes don’t contain nudity, but they are related to the blog in some sense and are interesting nevertheless. 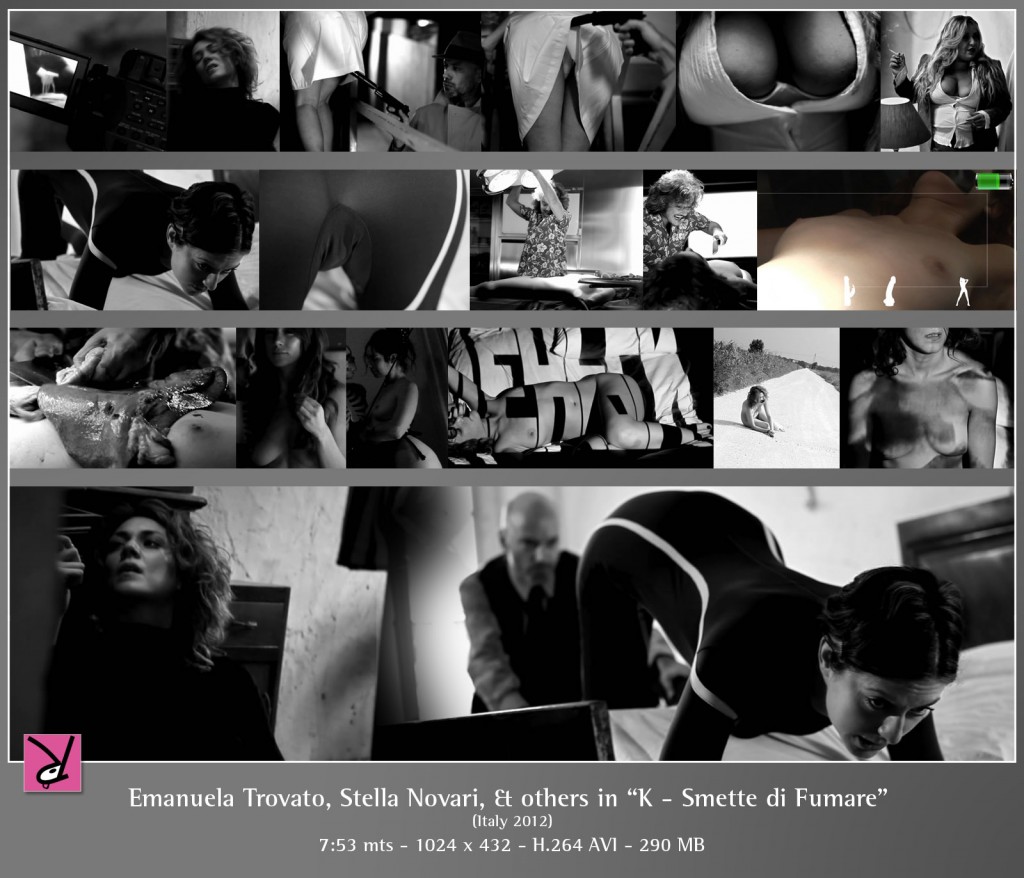 Bonus Compilation: Emanuela Trovato
Couldn’t help including more of Emanuela Trovato from the ‘Making of’ chapters among the DVD extras. What’s more, they’re in colour as well..! 🙂

Some snippets of Emanuela Trovato from the ‘Making of’ featurette among the DVD extras, and what’s more – in colour.