This film has justifiably ended up in the trash heap of mediocre Italian Sex Comedies of the 70’s, but Aldo Grimaldi’s 1979 epic trash Amanti Miei [Eng. Titles: My Lovers, and the misleadingly named Sexy Teenager] needs one last look into before incineration, for one reason only, and that is Annamaria Clementi. I can only say this beauty had been totally unlucky when it came to stardom, but then again working with the likes of Joe D’Amato isn’t exactly going to enhance her star-value either. 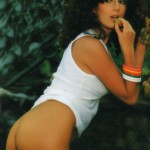 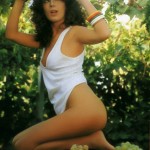 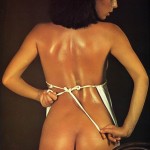 She did quite a few ‘spreads’ for mens’ magazines during the 70’s and 80’s and I remember reading in some interview that this is what she also enjoyed the most. I believe she’s now an astrologer and part-time makeup artist in the film industry. But what a stunning babe though she was..!

Anyway, bellissima Annamaria isn’t even the main character of this film – thankfully – that is played by Cindy Leadbetter. Annamaria plays Cindy’s best friend, but sleeps around with Cindy’s hubby. The story revolves around Cindy taking revenge on her husband after she catches him in bed with a bottomless teenager – as all self-respecting housewives do – by going on a shagging spree of her own, of course! Gegia plays the delinquent fifteen year old who hitchhikes her way into the hubby’s bed. I can’t be bothered with a custom graphic for this trashy film – but these clips were taken from my DVD so I guess this is about the cleanest clips you’ll find anywhere for the moment.

Clip 2:
Bad girl Gegia succeeds in getting laid by Cindy’s hubby, and also does some house chores later before retiring in the guy’s arms – Cindy catches them together and – uhh – who cares..!