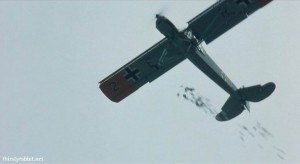 Set in Nazi-occupied Tunis during the height of the second World War, against the backdrop of Allied air raids, and Nazi propaganda aimed at dismantling amity between the Jewish and majority-Muslim communities that existed for centuries, the film focuses on the special friendship between two teenagers – Muslim Naur (Olympe Borval) and Jewish-French Myriam (Lizzi Brocheré) – neighbours since childhood, and whose homes even shared a common courtyard. 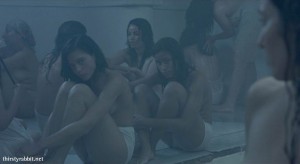 Naur is engaged to her unemployed cousin Khaled (Najib Oudghiri), but their wedding will only be allowed to go ahead after he finds himself a job. It is partly due to this reason, and partly for also having been taken in by Nazi assurances that they’d give Tunisia its freedom once the French and Jews are eliminated from the country, that Khaled starts working for the Nazis. 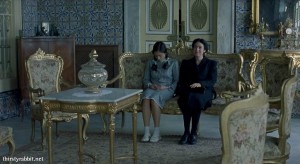 Myriam lives with her widowed mother Tita (played by director Karin Albou herself), who makes a living as a seamstress. When all Jews in the country are instructed to pay a hefty fine for the destruction caused by the Allied bombing raids, poverty-stricken Tita urges Myriam to marry the rich doctor Raul (Simon Abkarian), so that he could help the family pay the demanded ransom. But Myriam doesn’t want to marry him because he’s much older than her. 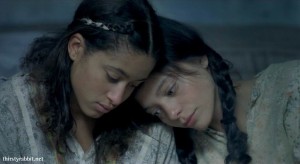 As the Nazi pogrom against the Jews in Tunisia, as elsewhere, intensifies, Khaled forbids Naur from continuing her friendship with Myriam on account of her own safety, and strains develop in the already complex relationship between Naur and Myriam, especially since their friendship is repeatedly tested due to matters beyond their control. But as events dictate, this will also be the time when they will require each other’s emotional support the most… 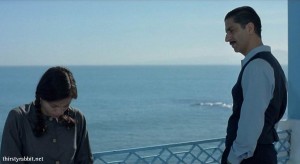 While the film’s central theme is friendship and loyalty, it also touches on war, intricacies in relationships, cultural idiosyncrasies, religious restrictions, and a woman’s place within different communities – all seen from a woman’s point of view. It transports us to a world that’s seldom seen by men; into the women’s section of hammams (bathhouses), women’s engagement parties, and their other rituals associated with matrimony, while giving us an intimate glimpse of the extraordinary friendship and bonding between the young protagonists.

The rich tones, rustic textures, and exquisite close-ups give the film a sensual quality that is as exotic as it is feminine. Exceptionally well-performed by Lizzie Brocheré, Olympe Borval and all the ensemble cast, and alluringly captured by cinematographer Laurent Brunet, Albou’s simple-looking yet intricate film succeeds in articulating a feminist interpretation of war, and the prevailing communal, social, and sexual politics in an engaging manner. The film is naturally Highly Recommended Viewing!

The Nudity: Lizzie Brocheré, Olympe Borval, Karin Albou, Najib Oudghiri, and others
Most of the film’s nude scenes – and there are many – are non-erotic; whether it is the casual and matter-of-fact nudity in the female bathhouse, or the surprisingly frank depiction, in close-up, of the waxing of a vagina – as part of preparing the bride the ‘Oriental’ way – it is shown with an admixture of brute force and tenderness. No body-doubles were used for the scene, and the sight of beautiful Lizzie Brocheré (as Myriam) personally undergoing the pubic hair removal procedure could even make a few queasy. She appears nude in additional scenes. Olympe Borval, apart from the one in the bathhouse, is seen partially nude during two sex scenes. Director Karin Albou, who plays Myriam’s mum in the film, also appears nude during a hammam scene.