We’re now getting down to the classics of the great Nicolas Roeg. His 1976 drama, “The Man Who Fell to Earth” can be rated as one of the all-time sci-fi classics in cinematic history, proudly occupying the same exalted podium as Fritz Lang’s Metropolis, Stanley Kubrick’s 2001: A Space Odyssey, Andrey Tarkovsky’s Solaris, and George Lucas’ Star Wars trilogy. The film’s uniqueness stems from the ambitious manner in which it dissects contemporary society, politics, and humanity as a whole in a typically European fashion – droll, filled with irony, and approaching it from the protagonist – an extraterrestrial’s viewpoint.

Storyline:
Based on a Walter Tavis novel of the same name, and adapted for screen by Paul Mayersberg, the film tells the story of an extraterrestrial humanoid who arrives on earth to help the few remaining beleaguered people in his home planet, which has turned into one big desert. The reasons for these are not given in the film (even if they go into some detail in the novel), merely stating lack of water as reason for his arrival. His people had known about earth for a while through intercepted radio signals and have come to gain intimate knowledge of its dominant species, humans. The plan is for him to amass wealth and power quickly with his advanced technology, and use it to build a spaceship to bring back the rest of the people, more importantly his wife and two kids. After landing in New Mexico, he assumes the name of Thomas Newton, and interestingly uses a British passport to identify himself. He soon embarks on a love affair with hotel chambermaid Mary-Lou, who also moves in to live with him. But his mind is restless, worrying about his family, and resorts to alcohol. When Mary-Lou discovers his true identity, she finds it extremely hard to love him as before, and despite efforts, they separate.

He succeeds emphatically in building his corporate empire, and also manages to build his spaceship. But the US authorities destroy it and take Newton captive for an undisclosed period of time. The reason for this, apart from the obvious desire to ‘study’ him after learning about his identity, is the fact that they were quite weary of allowing a single corporation to become so powerful as to pose a threat to the very existence of a government (Google, take note). By the time Newton realises he is free again, all the people he knew had aged considerably, while he remains his youthful self. He is still wealthy, but could do nothing with it as he realises his family may no longer even be alive. Despite people betraying him, he could hold no bitterness, even offering to help them financially if needed. He’s now a recording artist releasing songs with cryptic messages, which he hopes will one day be heard by his wife through the radio broadcasts that reach there. And the film ends with a drunk Newton passing off at a restaurant table while chatting with his former employee Bryce…

A true masterpiece:
When a creative endeavour cannot be bettered or replicated, either because of an artist’s unique state of mind, or serendipitous circumstances surrounding its creation, in my view, a masterpiece is born. And we are talking about a team of artists here. For a start, no one would even fund a project with such ambitious a scope these days – it is far safer to deploy CGI and work with a simple storyline, one that the impatient masses can sit through. There is so much going on here for a sci-fi film, using a variety of references, from Greek myths (Icarus) to Japanese folk art (Kabuki) and even Citizen Kane, it recreates the disorientation of anyone arriving at an alien planet superbly and shows our world as would be perceived by a visitor, warts and all.

Nic Roeg has a penchant for casting performance artists in films, like Mick Jagger in Performance, and Art Garfunkel in Bad Timing. Here, it’s an already famous David Bowie making a film début, playing the eponymous extraterrestrial who fell to earth. Not only does he look like one, during those heady Ziggy Stardust days he also felt like one, relying on cocaine to keep him going. During the shoot of the film, David Bowie was simply being himself, and what an impact it had on the film..!

The superlative cinematography by Anthony Richmond adds an additional layer to the film’s narrative. Coming from a cinematographic background, Nic Roeg has made the best possible use of widescreen – when I first watched this film, it was on TV during the 80’s (i.e., full-frame), it was a pleasant surprise when I finally got to see it in its original aspect ratio. The editing is crisp with few dissolving transitions – the way I like it, as it reflects on the quality of the screenplay and direction. The film is also supported by a superb soundtrack that also features some sumptuous saxophone compositions by John Phillips that sadly are not available on their own.

It may have a plethora of seemingly lecherous scenes and playful jokes, but it is an unapologetically bleak film, it won’t leave you in tears of joy. But this multi-layered gem speaks the language of anyone who feels alienated, anyone who find the system driving their spirits down. It is a film as relevant today as when it was made, and therefore Highly Recommended Viewing..!

DVD info:
The DVD I have is the excellent 2-disc NTSC Criterion Collection, which comes with a superb remastered transfer and loads of extras, including the paperback version of Walter Tavis’ novel. It may not include an interview with David Bowie himself, but it comes with an insightful commentary from Roeg, screenwriter Mayersberg, and an interesting interview with Candy Clark who plays Mary-Lou. But this edition is out of print now, and the ones being sold are ridiculously expensive. But there’s a recent Blu-ray from Optimum Home Entertainment (although Region 2) which appears promising, but not sure of any of the available extras. You can take a look at some comparisons here.
Amazon Blu-ray Link

Compilation: Candy Clark, Linda Hutton, Adrienne Larussa, Hillary Holland, and Claudia Jennings
I’d normally not brag about my compilations, but I must say I’m quite pleased with this one as it all falls in place neatly. It took a while but I think it was worth it. 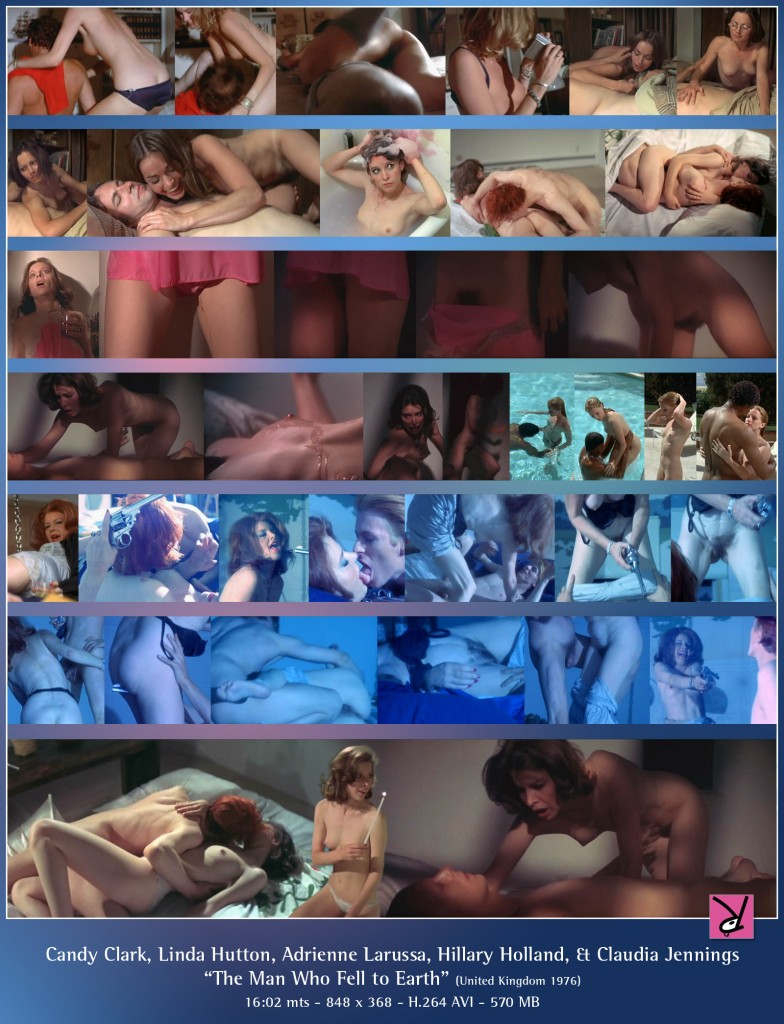