Alex van Warmerdam wrote, starred, and also made his directorial film début in what many consider to be a modern Dutch classic, “Abel”. It is also one of the most hilarious comedies I’ve seen from Holland – slapstick at times, and totally deadpan on other occasions, but absurd and funny all the same. I’d been following his more recent works with interest even before I got to watch this film, and as it turns out, this is now one of my favourite Warmerdam films.

The storyline revolves around Abel (Alex van Warmerdam), a thirty one year old agoraphobic still living with his parents – he hasn’t ventured outside the house in over ten years. His father Victor (Henri Garcin) is ashamed of him, while his mother Duif (Olga Zuiderhoek) over-compensates with her henpecking. After a psychologist tells them that the problem is not their son but their own attitude towards him, Victor decides it would be a good idea to get him to socialise with women, and brings home a female colleague (Loes Luca) from the amateur theatre he’s involved in. It turns into a disaster, and after Victor finds out that Abel and mum had secretly bought a TV – hitherto banned in the household, he blows his lid off and chucks Abel out of the house. Enter Zus (Annet Malherbe), a stripper with a heart of gold, who pities and falls in love with penniless Abel and takes him with her. Further hysterics ensue when Zus ends her affair with Victor, and he finds out that his love rival none other than his own son…

This is one delightfully twisted and absurd comedy with exaggerated characterisation and situations. The cinematography also has a nostalgic appeal. It is aided by fine performances, notably by Henri Garci who plays Victor, the direction, and in no small measure by the gorgeously voluptuous Annet Malherbe who plays the sexy temptress Zus – little surprise that she’s also director Warmerdam’s partner in real-life. This memorable and ridiculously funny film is Highly Recommended Viewing..!

DVD Box-Set [PAL]
This is a good value box-set that include no less than 9 films – all classics, from Alex van Warmerdam – my Recommended choice.

The Nudity: Annet Malherbe
The sensual and beautiful Annet Malherbe appears teasingly nude in a few scenes, mostly while performing her come-hither routine at a peep-show booth where she works. There is also some unintentional nudity in a scene when her character tries to elicit a sexual response from Abel. 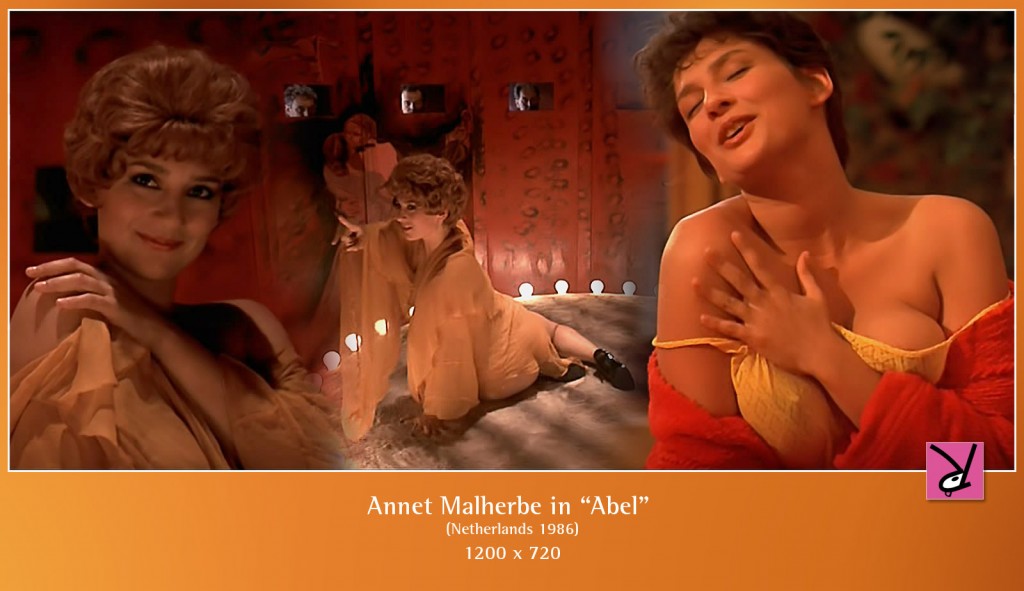