Prolific Romanian director Radu Jude’s drama “Îmi este indiferent daca în istorie vom intra ca barbari” [Eng. Title: I Do Not Care If We Go Down in History as Barbarians] throws the cat amongst the pigeons in his home country by highlighting the massacre of Jews in Odessa and surrounding towns in 1941 when Romania, then an ally of the Axis forces, occupied a region called Transnistria in what is part of modern Ukraine. 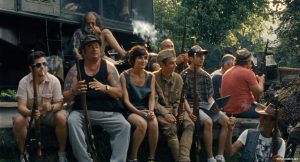 Young director Mariana (Ioana Iacob) is given the opportunity by a local Council to stage events from 1941 through street theatre as part of a community project. Mariana finds success in recruiting enthusiastic volunteers from among the general public. The Council helps her hire the necessary period accessories, and also allows her to borrow vintage military hardware from the city’s war museum. Mariana conducts further research on events of 1941. 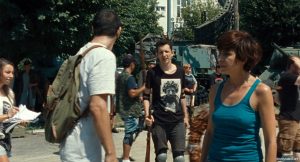 The sponsoring local authority is particularly keen to infuse a sense of national pride into its populace by eulogising the valour of the Romanian Army. However, Mariana finds it an opportunity to also portray details that didn’t particularly show the Army in good light, with an intent of reconciling with her country’s past. She discovered through her research that sections of the Army were decidedly anti-Semitic and were alleged to have colluded with the Nazis in deporting and exterminating thousands of Romanian and Slavic Jews, along with gypsies and other ‘unwanted’ people. 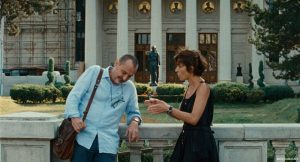 Nations, save Germany, generally do tend to whitewash the not-so-glorious chapters of their history. Romania’s post-war Soviet-backed communist regime and later governments were no different and only too keen to bury and forget the alleged events that Mariana wanted to highlight. She specifically targets the personal involvement of Mihai Antonescu in the Odessa massacre – a controversial nationalist leader who is seen by many as a hero despite having been convicted and executed for war crimes. 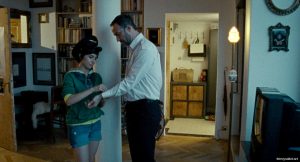 Voicing stiff opposition to Mariana’s intentions, the Council threaten to pull the project if she insisted on carrying forth her artistic agenda. While Mariana combats the various voices of dissent to her project, we also see her having an affair with a married commercial pilot (Serban Pavlu), who reacts insensitively upon learning of Mariana’s pregnancy. A fiercely independent Mariana wastes little time in ending the affair and moves on. In the same vein, she determinedly executes her project as originally conceived, but will be surprised by the response from sections of the audience… 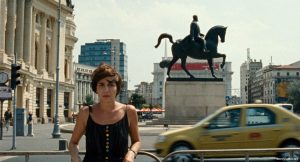 The political film, even while unflinchingly promoting a view point of the liberal left, nevertheless gives food for thought by exploring ways in which contentious issues could be discussed and brought into the open. As has been made plain in recent world events, there is a need for honest debate during times of strife; whether it is due to heavy-handed policing and racism, or reactionary rhetoric like hate speech and the pulling down of public statues in the hope of correcting historical injustices. A debate may not prevent them from happening, but might at least help in going some distance in healing some wounds. Highly Recommended Viewing..!

Ioana Iacob and Serban Pavlu from the Romanian drama,
“I Do Not Care If We Go Down in History as Barbarians” [2018, Romania].